It’s interesting to note that upon its release in 1981, The Fan was met with controversy due to multiple counts of celebrity stalking cases and the tragic murder of John Lennon.

There’s a showbiz saying that any publicity is good publicity, which probably pushed this above-average shlock a little more out-there than it deserved. The Fan does indeed have its moments, mostly thanks to a better-than-average cast that push it into a more watchful territory.

Screen legend Lauren Bacall plays aging actress Sally Ross, who is preparing for her first stage musical at 50 years of age. Dubious, but handling the situation professionally, it gives the not-so-secret admirer Douglas Breen (Michael Biehn, showing promise in his screen debut) a chance to catch her out in the open by sending countless numbers of fan-mail her way, with each one building to a more unsettling motive.

Sally Ross’ secretary Belle Goldman (a scene-stealing Maureen Stapleton) is unbeknownst to Douglas, the first point of call to receive the letters, and a darkly amusing rift of written correspondence between them soon halts any further connection Breen may have with Sally. It’s here Breen’s intimate thoughts turn to rage and spark murderous tendencies that put anyone that gets in his way to meet Sally to… Well, let’s just say he lets his switchblade do all the talking. It’s also worth noting that at the time of the film’s release, the horror subgenre of ‘Giallo’ murder-mysteries was quite popular worldwide, mainly due to more well-known filmmakers like Dario Argento. After Paramount studios had a hit on their hands with Friday the 13th (1980), they quickly bought The Fan to cash in some more, and according to a less-than-happy Lauren Bacall, made it gorier than the script originally intended.

Whilst it is a little tame by today’s standards, there are a few scenes that play the jump-scare factor quite well, with first time director Ed Bianchi (who would go on to direct some high quality television like Deadwood (2004-2006) and Boardwalk Empire (2011-2014)) setting up tension nicely when it’s needed, with some unexpected witty black humour thrown in to boot.

When all is said and done The Fan could be written off as your standard stalker thriller, but maybe that’s because it’s been done to death so much since its release in 1981, that perhaps revisiting it tarnishes what may have been a more slick and original outing at the time. Thanks to some great performances from Bacall, Biehn and an underused James Garner who plays Sally Ross’ ex-husband, along with some nicely staged set pieces (especially the unsettlingly creepy final shot), The Fan may just be worth watching and/or re-watching if you happen to be in a ‘Giallo’ type mood.

The source novel, written by Bob Randall and published in 1978, which was before the cycle stalking of public figures became a major problem, was his first; its form is “epistolary,” consisting of various letters between many of the characters. 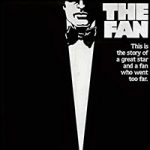