In 2014, John Wick redefined the action-film genre. Borrowing heavily from the realistic approach to fight scenes made popular by the Bourne (2002-) series, the film cast an unexpected lead (Keanu Reeves) as a one-man wrecking crew with a hidden past seeking revenge for the death of his dog. Since then we’ve had plenty of knockoffs (Atomic Blonde, Gemini Man, Jack Reacher), but nothing that’s matched the film’s intensity. Enter Extraction.

Starring Aussie heartthrob Chris Hemsworth as alcoholic mercenary Tyler Rake, an elite former special forces soldier struggling to come to terms with the death of his son, Extraction is a balls-to-the-wall actioner with a star turn from Hemsworth.

Rake is hired to rescue the son of India’s biggest drug lord who’s been kidnapped by Bangladesh’s biggest drug lord, the sinister Amir Asif (Priyanshu Painyuli). As you can imagine, things don’t go to plan, and Rake finds himself trapped in the Bangladesh capital Dhaka with the kid he’s rescued, Ovi Mahajan Jr (Rudhraksh Jaiswal). Forced on the run, he and Ovi must fight their way to freedom before Asif’s network of thugs and street kids can stop them.

As far as action flicks go, Extraction is one of the most violent films in years. There are bloody gun battles, no holds barred hand to hand combat, car chases, death by rake, and one 12 minute long-form “one-shot” that will have you on the edge of your seat. It’s like John Wick on steroids. It should come as no surprise the action scenes are expertly choreographed, with first time director Sam Hargrave a well-respected stuntman who’s worked on the Avengers (2012-) films, The Hunger Games (2012) franchise and many more action flicks over the past two decades. What is a shock is Joe Russo of the Russo brothers (responsible for some of Marvel’s most successful films) wrote the screenplay from an adaptation of the graphic novel Ciudad. A surprisingly ferocious script from the guy who directed a handful of Community episodes.

The biggest complaint people seem to have with this film is the lack of story. While there isn’t a heap of background information on Hemsworth’s character or his motives, there’s enough of an emotional pull between him and Ovi to make things work. Extraction doesn’t pretend to be anything more than a mindless explosion of violence and this is sure to please anyone who’s a fan of classic action films or just wants to escape from the real world for a few hours.

The biggest gift this film gives is Hemsworth, who nails the burnout merc stereotype to a tee as he willingly throws his body into the action. Even better is he gets to play an Australian so he doesn’t have to put on an accent, something he’s never been good at. The rest of the supporting cast is great too, with David Harbour a familiar face as a former teammate of Hemsworth, Randeep Hooda enthralling as henchman Saju and Priyanshu Painyuli menacing as evil drug lord Asif.

Extraction is a heart-pounding thrill ride with an on-form Chris Hemsworth and enough violence to please the ancient Romans. Well worth a watch.

Arnold Schwarzenegger and Bruce Willis were attached to play the lead role at one point. 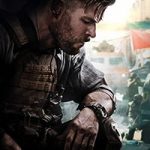