‘Escape and Evasion’ Highlights the Effects of PTSD in Veterans – Review

A soldier is always at war, even after his mission is finished. That’s the idea behind Escape and Evasion, a film written and directed by Storm Ashwood.

Seth (Josh McConville) is a lonely Australian soldier that has returned from a failed mission in Myanmar, where he was the only survivor. Being back home is not helping him find peace and ease his mind, as he is haunted by horrific memories of the past. He wants to be left alone and put his past behind him, but Rebecca (Bonnie Sveen), a journalist and twin sister of one of the dead soldiers, finds him and starts asking uncomfortable questions. She doesn’t believe her brother died on a landmine clearing mission (which is the official version) and is determined to find out the truth at any cost.

Suffering from severe Post-Traumatic Stress Disorder (PTSD), Seth is not capable of having a normal life. War has changed him, and he is now a troubled man. He lives in a shack in seedy conditions and is constantly tormented with terrible visions. He had already lost his wife, and can now see his young daughter slipping away from him, as he is failing in his role as a father.

Throughout the movie, Seth keeps having flashbacks that provide us with more pieces of information about what happened in Myanmar. He has been hiding a horrible secret and it’s consuming him inside. We can see the scars on his skin as permanent reminders of his past experience in the jungle and of all the physical suffering he has been through.

Mental scars are harder to see, but Ashwood’s amazing direction succeeds at depicting Seth’s pain. We see him troubled: sweaty, shaking and with accelerated breath. His eyes are open, but he cannot see what’s in the room. He is somewhere else, back in the jungle, facing his demons. He has left Myanmar for good, but the trauma is still with him. We see him press a gun to his temple and unlock it. Suicide seems the only way for Seth to make his torment stop. He survived Myanmar, but the aftermath is as dreadful. He is unable to live and unable to die, and doesn’t pull the trigger. Escape and Evasion is a powerful, moving film portraying the devastating psychological effects that war can have on a soldier. Storm Ashwood is a master in showing emotions, having graduated as a film director with an honors degree in film psychoanalysis. This can be appreciated all over the film through Seth, perfectly interpreted by Josh McConville. His hallucinations are dark, strong and vivid, and visually very detailed. Together with strong effects, Seth’s deliriums feel painfully real and impacting.

Sadly, some parts of the film are weaker. A not very convincing romance is born between Seth and Rebecca, and in one of the scenes in the jungle, a mysterious villager with a long, white beard appears and makes a very mysterious statement, in perfect English.

Besides these overly dramatic or exaggerated passages, Escape and Evasion is a compelling film that brings light to a difficult topic: PTSD in soldiers. And that’s a very important subject because, according to the filmmakers, twenty percent of all military personnel who serve in combat will suffer Post-Traumatic Stress Disorder. Once in a war zone, always in a war zone.

In the movie, Rebecca gives Seth the business card of a psychotherapist, advising him to get help. His name is Freud, like the creator of psychoanalysis. 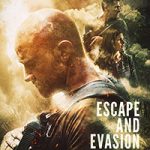