Jane Harper’s popular mystery novel ‘The Dry’ is getting a film adaptation, with Eric Bana set to star in the lead role as Federal Agent Aaron Falk.

‘The Dry’ tells the story of Aaron Falk, a Federal Agent, who after being absent for 20 years returns to his rural hometown to attend the funeral of his childhood friend Luke, who allegedly killed his wife and child before taking his own life.

Aaron agrees to help with the investigation after it’s discovered that there’s more to the story than what initially appeared to be a murder-suicide.

Further investigation trudges up painful memories from Aaron’s past – the death of his friend Ellie Deacon as a teenager.

Aaron suspects the two crimes, while 20 years apart are related.

With the townspeople prejudiced against Aaron’s arrival, he’ll aim to clear Luke’s, and his own innocence in the involvement of these deaths, through many twists and turns. Harper’s New York Times bestselling book was a debut hit for the author, gaining international recognition not long after its release.

The film adaptation will shoot in Victoria from 25 February to 12 April 2019 and will be directed by Melbourne-based Robert Connolly, under the Made Up Stories production company banner, who also produced the hit HBO TV series, Big Little Lies.

Connolly has had a storied career in the Australian film industry, with past works such as 2014’s Paper Planes and 2009’s Balibo.

Eric Bana seems like a great choice for the role, allowing him to bring his best dramatic acting skills to the part.

No word as to when the film is scheduled for release, however, we’ll keep you posted.

Check out more details about ‘The Dry’ on the book’s Goodreads page! 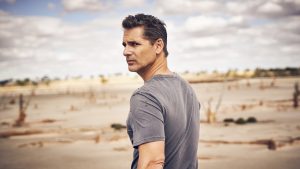