In a future world, young boy and girl geniuses are being recruited and military-trained to battle dangerous alien forces, ones that nearly destroyed Earth’s civilisation in a previous attack not long before.

Ender Wiggin (Asa Butterfield) is one of the most promising young military recruits and is quickly promoted up the ranks by showing exceptional results in a series of behavioural and strategic tests. Colonel Graff (Harrison Ford) is the man in charge of the recruits and personally selects Ender to lead his army against an impending alien attack.

Ender’s Game is an entertaining science fiction entry into the genre of films based on young-adult fiction novels. The film does a good job of toeing the line with regard to appealing to its target audience without being tacky. The film’s themes are mature enough to appeal to older adults whilst retaining safe sensibilities.

The film suffers in a lack of ability to build up mini and major climaxes, making it hard for the audience to build a deep emotional connection to the characters. Thankfully, the characters are just interesting enough to tide us through and the performances are excellent across the board.

Asa Butterfield is excellent as Ender. Butterfield shows good range and acting potential beyond his years as his character goes through various emotional challenges throughout the film. Harrison Ford also takes a brilliant turn as the hard-nosed commander and Ben Kingsley is as great as he is in every other movie he’s been in. The rest of the supporting cast such as Ender’s soldier friends and enemies have all been cast well and play their roles accordingly.

Another standout is the film’s visual effects and production design. It appears no expense was spared in the production design of the film in order to create a feasible, realistic future-world and it has paid off. Most of the film’s training and battle sequences are CGI-heavy, however they are of a high standard. Ender’s game is definitely one of the prettiest films of the year to look at.

Ender’s Game is an entertaining and well conceived science fiction film. Whilst it slightly suffers in its ability to deeply connect its audience to the characters, the performances and visual style of the film are good enough to keep viewers interested from beginning to end.

For the wirework in the battle room, the actors trained for a month with individual Cirque du Soleil members so they could do the wire performances themselves. 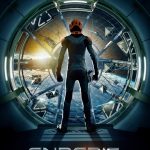