I think I did high school wrong. Way wrong. I didn’t get up to a tenth of the mischief that the girls in Dude did, and yet they totally rocked it.

The only thing that makes me feel a smidge less like a loser is knowing that the actresses playing the four main roles are all over the age of 25. The confidence dripping off them is actually thanks to their youth having already been lived and not, as it happens, because they are some superhuman breed of juvenile.

Dude follows best friends Lily (Lucy Hale aged 28), Chloe (Kathryn Prescott aged 26), Amelia (Alexandra Shipp aged 26) and Rebecca (Awkwafina aged 29) as they navigate the halls of their high school and brace themselves for the road ahead. Each of them has their own personal issues to deal with at home, and each girl is a pillar of support for the other. Together, they have a very unique and strong friendship, one that I found myself envious of by the time the credits rolled around.

Lily is a high achiever who likes to be in control. As student body president, she has a vision of what her life and the lives of those around her should look like. She expects that everyone fall graciously in line with her imagined futures, and that they do so without question. Of the four girls, we follow her the closest and therefore see the world mostly from her perspective. Written and directed by Olivia Milch (and co-written with Kendall McKinnon), Dude unabashedly explores the world of teenage angst in modern times. Milch exercises her creativity in hewing together an alternative storyline that strays from the norm and dishes up a new understanding of reality. The film allows a platform from which Lily’s character can develop, as she is the one holding too tightly to the past and needing to accept the truth of her present and of her future.

Milch is unapologetic in her depiction of what happens behind the closed doors of high school. She describes taboo topics in detail, from kids doing drugs to kids having sex, from questionable teacher-student relationships to parents allowing too much freedom. Milch cleverly explores this material in a way that leads you to empathise with the four girls rather than condemn them.

Though Dude left me feeling as though I’d forfeited all the best parts of high school, it also proved that there is something quite unique in being brazenly and shamelessly honest. The lives of Lily, Chloe, Amelia and Rebecca are so different from what mine ever was, and yet somehow, I found that I could relate to them just the same.

Dude is the directorial debut of director Olivia Milch. 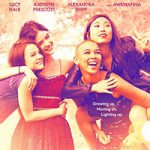