Downsizing is a refreshingly original dark comedy with a conscience that will leave a big impact.

Set in a not-so-distant future, scientists in Norway have discovered a unique solution to the world’s over population problem by shrinking humans down to only six inches tall. The process, termed downsizing is a radical way to cut down on consumption of the earth’s resources, and an extreme way to literally reduce humanity’s footprint on the planet. Jumping forward by a decade, a voluntary portion of the population have undergone the procedure and are living in themed miniature villages created across the world. However, this is not predominately a global hippy movement, as it provides an opportunity for regular people to live a life of luxury and leisure in the downsized world. This becomes a key tool to entice volunteers whose assets are now worth 100 times more in this new world.

Downsizing captures the imagination of Paul Safranek (Matt Damon), who is unsatisfied with his lot in life after abandoning his plans to become a doctor in order to care for his ailing mother. He finds himself stuck working as an occupational therapist at a factory, financially struggling and still living with his wife in the family home that he grew up in. Enticed by the opportunity to live the good life and leave his stresses behind, Paul encourages his wife Aubrey (Kristen Wigg) to undergo the irreversible process with him and live a life of luxury in Leisureland.  However, far from being the scientific breakthrough promised to eliminate Paul’s problems, he quickly discovers that his frustrations remain and his struggle to find his place in society continues.

A year later and still stuck in a monotonous life, Paul strikes up an unlikely friendship with his European playboy neighbor Dusan Mirkovic (Christopher Waltz), who has capitalised on the highly profitable business opportunities created by smuggling contraband into the new miniaturised market. This friendship leads Paul to form an unlikely partnership with a Vietnamese cleaner; Ngoc Lan Tran (Hong Chai), who was shrunken against her will by a military dictatorship that she was protesting back in her home country. Her escape to America, stowed away in a widescreen TV box, cost her the lower part of her leg and she lives in a community of refugees responsible for providing the cleaning services in Leisureland. These experiences expose Paul to the reality behind the new revolutionary procedure, as the same global problems and inequalities exist in the miniaturised world. Paul finds himself questioning his purpose, leading him to embark on a passionate quest to find his place in both worlds.

With Downsizing, director Alexander Payne has conceived a strikingly original premise. While the Honey I Shrunk the Kids (1989-1992) franchise may have introduced audiences to the concept of miniature people struggling to adjust to the world around them, it was all for comedic effect and the story revolved around family friendly fun. Payne’s story, in contrast, is derived from a serious global issue and while his extreme solution has amusing moments, there is an underlying darker message about human responsibility. He also doesn’t shy away from showing how this procedure has been exploited by those looking for financial and political gains and that there isn’t a Disney happy ending. Payne handles the creation of this new miniaturized world, which co-exists with the ‘big’ world in such a matter of fact way, that it immediately feels completely acceptable. He has substantially fleshed out the concept by tackling many of the scientific questions and showing great attention to the small details, which also add to the comedic effect. The procedure of downsizing is shown as a well-established routine – we are told early on that it can only be applied to organic matter so there are intricate scenes showing the preparation of each volunteer to undergo their downsizing. They are stripped, all their body hair shaved off and extensive dental work is carried out before being shrunken as a forgotten filling would result in the individual’s head exploding.

The technical aspects of film are shown the same level of care with excellent production design and visual effects, ensuring that the perspectives involving full-sized and miniaturised humans together in the same frame always look correct and believable.

Hong Chai stands out with a remarkable and complex performance, which perfectly balances Matt Damon’s role as an average mid-Western-American man. Hong Chai’s performance initially feels like a slightly stereotypical portrayal of a bitter refugee with her delivery of harsh broken English, but as the film progresses she becomes the most surprising and influential character. It is her role that exposes Matt Damon’s character to the real disparities in the world around him, in order for this utopian world of luxury to exist, there needs to be someone to clean it. She challenges his grandiose ideals to tackle the global problems and failure to see the local problems and his ability to help his immediate surroundings.

While the concept of shrinking size provides great comedy, the plot constantly evolves to explore the moral issues surrounding downsizing and questions the world’s desire for a quick fix to its problems. It challenges both the impact and responsibilities of humanity on the world’s resources as the main character searches for his place in this landscape. It also highlights the inequality between cultures and pay classes, which shines a light on contemporary issues facing not only the United States but also globally.

This film is truly unique, which is either its greatest asset or its greatest downfall, depending on how willing the viewer is to accept the premise. Believers will be taken on a journey with unanticipated complexity and a moral conviction. Non-believers may be unwilling to sever ties with their nostalgic memories of Honey I Shrunk the Kids and be unprepared for the darker tone of this film.

Pre-Production began in 2009, but the project was put in a turn-around when Alexander Payne decided to put it on hold to focus on The Descendants, then later, Nebraska. 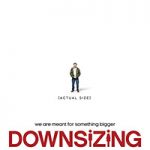