Can you say “the Dora film is a wildly imaginative, well-produced and clever film?” Sí, that’s correct!

I didn’t think that the day would come when I would be singing Dora the Explorer’s praises. When this movie was announced I shuddered and I watched the trailers with a mix of awe and revulsion. Why was the ever-positive Dora being brought into the live-action realm? Why is the actor who portrays the child cartoon character eighteen years old?

However, it seems that the team behind this film had pre-empted the initial aversion the project would receive, and they have blown all expectations out of the park.

Dora (Isabela Mona) is a budding teenage explorer living in the jungle with her researcher parents (Eva Longoria & Michael Peña). Her only friend is Boots the Monkey (Danny Trejo) and she is perfectly happy with that. Dora’s survival skills are put to the test when she is sent to attend high school with her cousin Diego (Jeff Wahlberg) in the city. Lacking crucial social skills, Dora struggles to fit in with a class of species she has never encountered before – teenagers. When her parents go missing in the jungle while searching for the Lost City of Gold, Dora is flung into a world of danger, mystery and camaraderie. Kidnapped alongside Diego and a rag-tag bunch of schoolmates, Dora must battle quicksand, Swiper the Fox (Benicio del Toro) and a gang of thugs intent on finding the Lost City of Gold. Along the way friendships are formed, songs are sung and the lucrative Dora franchise is introduced to a much wider audience.

The film is incredibly self-aware – the iconic fourth wall questioning is brutally nipped in the bud in the opening scenes. It also doesn’t shy away from making light fun of the concept of a bilingual teenage explorer with a monkey best friend and a masked fox for a nemesis. The plot twists and turns with good pace, but it’s not too intricate for younger viewers to keep up.

Homage to its cartoon roots is rife throughout the film, with an incredible scene involving some magic plants and an epic trip for our young explorers absolutely stealing the show. The film hints at some adult humour, but it is so well done that younger viewers won’t pick up on the source of the adult’s laughter.

All in all, this reintroduction to Dora seemed to have the odds stacked against it finding success with a mainstream audience, but it is a true delight. It’s too early to call it, but Dora and the Lost City of Gold is definitely in the running to be the best film I’ve seen all year. And I’m not ashamed to admit that.

Isabela Moner, who plays Dora, had earlier starred as Dora’s friend Kate in Dora and Friends: Into the City! (2014). 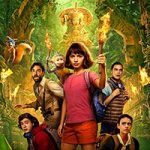