This film is not one to watch while scrolling through your phone – you’ll need to have your eyes glued to the screen if you’re to make any sense of the glorious mess that is Terry Gilliam’s The Man Who Killed Don Quixote.

Starring the permanently kooky Adam Driver, The Man Who Killed Don Quixote is a deep-dive exploration of reiterations of reality, and the way reality is easily distorted. Trust me, there are going to be a few moments in this film where your exclamation of “what?” will quickly be replaced with a realization of “oh, gotcha.”

The plot of the film can be summarized in one word – chaotic. Toby Grisoni (Driver) is a prodigy advertisement director struggling to film an ad in rural Spain. He is disillusioned and on the verge of abandoning the project when a Gypsy (Óscar Jaenada) sells him a pirated copy of Toby’s own student film, filmed a few villages over ten years beforehand.

Stealing a motorbike, Toby returns to the village to find that his student film caused unimaginable damage to the villagers who starred in it. The old shoemaker Javier (Jonathan Pryce), who was cast as Don Quixote has since adopted the fictional persona and believes he is 400 years old and will never die. Javier mistakes Toby for Sancho Panza, his trusty squire. Toby is sucked unwillingly into the elaborate world that has been constructed around the delusional man. With Toby as our only source of what is reality and what is fiction, it becomes increasingly harder to trust his perception of events as he becomes dehydrated, exhausted and sun-affected.

At one point, Toby is locked in an attic by villagers, but soon believes he is being held by a terrorist cell. He plans an escape, only to find that he is actually being hosted by a group of kind Muslim immigrants sheltering in the ruins of an old village. Later, Toby stuffs his pockets with Spanish gold he finds hidden within a rotten donkey carcass for the coins to change to scraps of metal a few scenes later. Nothing is as it seems – for Toby or the audience.

The Man Who Killed Don Quixote is reminiscent of Terry Gilliam’s love of all things twisted and absurd. His habit of disrupting traditional plot conventions is clearly evident and makes for an exciting, intriguing viewing experience.

The long road for The Man Who Killed Don Quixote to reach cinemas has almost as many twists and turns as the film itself. Gilliam first starting working on the film in 1989 and numerous attempts to make the film over the past three decades were squashed by funding issues, illness, sets and equipment being destroyed by floods and problems securing insurance. The role of Toby has passed between Robin Williams, Johnny Depp, Ewan McGregor and Jack O’Connell before Adam Driver arrived in 2017 and helped secure the necessary funding. John Cleese, Jean Rochefort, Michael Palin, Robert Duvall and John Hurt were all previously cast as Don Quixote before Jonathon Pryce took on the role.

The Man Who Killed Don Quixote is definitely worth a watch, if not for the mind-bending distortion of reality then out of respect for the true feat of endurance the film represents.

Production finally finished on June 4, 2017. A few days later, Gilliam jokingly posted on Facebook that he had accidentally deleted the film. 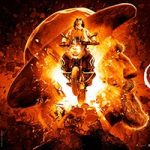