Despite its A-list cast and hefty budget, Dolittle is destined to be lumped into a 3-disc DVD set with other films that should have been direct-to-video.

Dolittle opens with a sweet little cartoon documenting the story of Dr. John Dolittle (Robert Downey Jr), who can speak to animals, and his adventurer wife Lily (Kasia Smutniak). When Lily succumbs to a storm while at sea, Dolittle retreats inside the walls of his manor with a menagerie of exotic animals. His beard grows long and tangled and he develops a fear of interacting with humans.

Dolittle is forced out of his comfort zone when Stubbins (Harry Collett), the nephew of a local hunter with a penchant for saving animals rather than shooting them, and Lady Rose (Carmel Laniado) slip past his defenses into his manor. Lady Rose implores Dolittle to come and help the Queen of England (Jessie Buckley), who is gravely ill. Learning that if the Queen dies he loses his haven for the animals, Dolittle begrudgingly agrees to examine the sickly monarch. He then sets out on a ship with his animals and Stubbins to find the one plant that will cure the Queen’s illness. He must follow the footsteps of his long lost love, but first, he must face his past.

This is where it becomes clear that the screenplay was handled by too many people (the film boasts a total of five screenwriters). The plot almost falls away completely, with actions having little consequences and no real sense of urgency is maintained. The CGI of the animals is clumsy and looks as if they’ve stepped right out of an early 2000s film. Their famous voices often jar with the animal characters and adults will spend most of the film trying to figure out why they recognize the voice of a nervous gorilla and dopey, bro-like polar bear. Emma Thompson, Rami Malek, John Cena, Kumail Nanjiani, Octavia Spencer, Tom Holland, Craig Robinson, Ralph Fiennes, and Selena Gomez have all lent their voices to the glitchy animals, but not even this choir of well-established voices can level-up this film. Fresh off his decade-long stint as the legendary Tony Stark in the Marvel Cinematic Universe, Downey Jr can barely muster the energy or a coherent Welsh accent to sustain the film. It’s almost cringe-worthy.

Kids young enough will get a kick out of Dolittle, but older generations will be longing for Eddie Murphy’s iteration of the famous, animal-talking doctor. 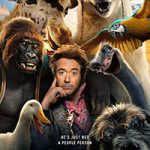