Petra Biondina Volpe’s The Divine Order is a converstation starter, and a film with a touching sentiment at its core, but it leaves a lot of open questions and evokes the uneasiness of modern identity politics, by shying away from the complexities of our own age.

The film opens with raw footage from America in the 1970’s; The Black Panther party, protesting Suffragettes, Hippies in the street marching against the Vietnam war — all of which mirror viral social media movements of our own time; Black Lives Matter, The #metoo movement, the anti-gun movement — these groups all having their foundations in these earlier triumphs of left wing politics, and growing out of the idealism of socialism.

Meanwhile, as the film states ‘Everything in Switzerland was still the same’, we are introduced to the charming and quaint Nora, played by Marie Leuenberger, a sort of Swiss, girl-next-door version of Jennifer Lawrence. Nora is a dissatisfied 42 year old housewife, who has never had an orgasm, and is about to get swept into the women’s suffrage movement in Switzerland. Nora is married to Hans, the ‘love of her life’, played with nuance and volatile masculinity by Maximilian Simonischek. Hans is portrayed as a character with a good heart; empathetic with women wanting the vote, but pressured by the antagonism from his male peers to keep women under patriarchal control, resorting at times to childish demands, but never resorting to violence against his partner, like other men in the town.

Perhaps Volpe’s greatest success in The Divine Order was to create genuinely nuanced empathetic characters on both sides of the gender debate (except perhaps for Nora’s grumpy misogynist father in law, who is a callous and horrible man, representing perhaps the stubbornness of older generations). In the end, Nora’s only way to defy the patriarchal order in her own home is to blackmail her father-in-law, by threatening to out his pornographic habits — which foreshadows the modern #metoo tactic of shaming as a tool of political power. As the 1971 referendum approaches on women’s rights to vote (amazingly late for such a simple precedent), Nora realises she can no longer stay silent, and so she teams up with a wise, world-weary old lady, Vroni (Sybille Brunner), who has been embittered through prior attempts to gain the vote, and Graziella (Marta Zoffoli), a seductive divorcee from out of town, who turns out to not quite be what she seems. The group then fight horrible levels of adversity as the entire town turns against them.

As well as showing the hardships of women in this righteous struggle for political equality, the film also deals well with the fallout that occurs to empathetic men, who support progressive politics, only to be shamed and demasculated by their peers, and forced to take on domestic roles, where men who support traditional religious and patriarchal institutions often remain happier and less troubled, benefiting from women’s oppression.

There are some solid performances in The Divine Order, including that of Ella Rumpf, Nora’s troubled sister who is shamed by the townspeople for her sexual activity, being referred to as ‘The Town Bicycle’. The cinematography and camera work is humble and unassuming, at times banal, but it does capture the stifled atmosphere of the age, with American styles of liberation slowly creeping in to the imagination of the Swiss townsfolk. Nora is inducted into a hippy class about ‘Yoni Power’ at one point, during one of the many humorous moments of the film, and told to recognise her unique vagina spirit animal, which they identify by staring up their own skirts with a mirror. Nora discovers she has a tiger between her legs, and resolves to confront the problem of never having orgasmed in her life, getting her partner to perform oral sex for the first time. But ultimately, at the advice from her female comrades, Nora learns the power of taking the burden of responsibility for orgasm on her own shoulders. In some sense, the problematic legacy of the sexual revolution is explored, however the film fails to follow the threads in the narrative to the modern era, preferring to rest on the laurels of the past. After all, who can doubt that women deserved to get the vote?

Overall, The Divine Order is a thought provoking film, dissecting the religious notions which dictated the way Western society operated up until the 1960’s and 70’s. The film asserts the importance of the individual to stand up and speak the truth, no matter the ramifications. But in an age where responsibilities of men and women toward each other are extremely ambiguous, and young generations of men are opting to stay unmarried or join men’s movements like MGTOW, the future of gender politics has never been more uncertain.

The important linchpin for progress to continue, in my view, is to keep the conversation alive, and try to escape the black and white logic of extremist ideologies, which this film attempts, with its widening of the empathetic margin in complex identity politics. This should be commended, and sought for in other films that tackle similar issues. Equality is not a singular viewpoint to be attained by subterfuge or blackmail, it is a conversation between people with different identities and desires, satisfied only with compromise, debates, and open democratic platforms. There is no end goal, only an ongoing conversation, which is better resolved only when people with different political opinions have compassion for the opposing side of the debate.

Not So Fun Fact:

In Switzerland, up until 1985 women had to ask their husband’s permission if they wanted to get a job. 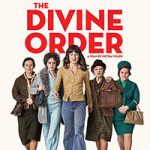 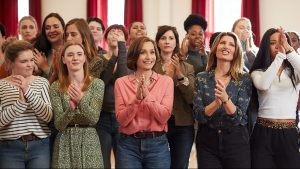 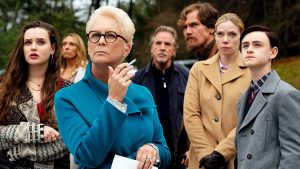 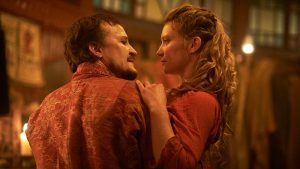