“It was an atrocity,” Bigelow told The Guardian, speaking on the horrific events which took place in Charlottesville, Virginia:

“I don’t know where we go from here. Fear is not an option. I feel compelled to do what I can in response. And using the medium I have available to do that.”

Soon recalling all the lives lost to police brutality and possible racism since the production on her film Detroit began:

“Philando Castile. Michael Brown. Trayvon Martin. Eric Garner. You can’t just switch it off. You carry it with you. James Baldwin said: ‘Nothing can be changed until it is faced.’ And in America, there seems a radical desire not to face the reality of race. So these events keep replaying.”

Paired with Paul Greengrass’ cinematographer Barry Ackroyd, who captured the raw grit of war zone Afghanistan in her 2009 thriller The Hurt Locker, Bigelow faces these atrocities head-on with an unflinching look at what can only be described as “war and torture”. Using vintage lenses to capture stunning multi-angle digital footage, interwoven seamlessly with the presented archived material, it reminded me of Peter Berg’s 2016 drama Patriots Day, in that uncanny blend of horror and reality sure to get the claustrophobic hearts pumping profusely.

Set during the 1967 riots of Detroit, Michigan  –  several years after President Lyndon Johnson signed The Civil Rights Act and The Voting Rights Acts – southern soldiers, police officers, security guards and African-American citizens dance in the thick of radical, racialised chaos. Bigelow re-staging the catalyst of the 12th Street Riot; a violent police raid on an unlicensed bar operating out of the second floor of some random printing company. Soon resulting in the foggy, dilapidated streets being coated in fire and blood. “This is like fuckin’ ’Nam,” screams Will Poulter in his incredible performance as Philip Krauss, a fictionalised character from screenwriter Mark Boal, who based his archetypes off the real and volatile officers who came before. Krauss’ rule of the streets being one of contradiction, where looters are shot so easily in the back with his shotgun shells, hiding his actions under the guise of “protecting the law”.

It’s this toxic mix of the perpetual struggle for the black working class and brutal law enforcement exploitation that makes for true cinema horror.

Krauss is right. It is just like Vietnam. All the way down to the rock bottom of Americana when Krauss and his uniformed brothers descend on The Algiers Motel, where singers Cleveland Larry Reed (Algee Smith) and Fred Temple (Jacob Latimore) have sought refuge, and the men who swore to protect the weak citizens are in fact the monsters themselves.

It’s not the one gun in the motel people should fear, but rather the many who charged in with the approved monopoly on life and death, with agendas and behaviours ready to unleash at any moment.

Searching for “a sniper” that shot at them at the street, the film turns into an exercise in power games, or as they say, the brutal interrogation tactic known as the “death game”.

They discover two innocent white girls in the arms of a retired Vietnam veteran named Robert Greene (Anthony Mackie). A harmless encounter they seek to exploit to track down their man. The rogue police officers begin to pin the suspects on various crimes, such as pimping, prostitution, assault, murder, and even make it appear they’re killing other suspects in the other room to get the others to talk. It’s the stuff of absolute suspenseful nightmares.

A nightmare that Melvin Dismukes (The Force Awakens’ John Boyega) understands all too well as the tough, reserved security guard who is witnessing all the horror. In the motel, Dismukes is no coward filled with the rage and violence of his hotel invading ‘peers’, but he’s smart enough not to take a bullet for a cause that will go forgotten. His archetype, much like a young Denzel Washington, is about how we see such individuals and atrocities exist, and that deescalation and justice, should it ever occur, takes more than brute force and demonisation. It requires a wit and tenacity that rivals the monsters they’re up against, which is one sad reality.

The Algiers works as an individualist holy grail. Rather than muddying the waters in a broad stroking political condemnation, the night drags on as a psychological autopsy into the archetype and the people who embody them themselves.

Krauss, with his sociopathic comrades Flynn (Ben O’Toole) and Demens (Jack Reynor), delve into the animalistic hysteria of the racist 1960’s being. Their hysteria at the thought of multiracial sex, at respect and passivity towards another race, which exposes sheer idiocy of identitarians on either side. It’s this same dehumanisation approach that shows just how natural monstrosity comes to those who give up on upholding any social progress and respect, whether they be the neo-nazi racialists of the alt-right or your social justice warrior subjectivist on the now coined “alt-left”. It’s all natural, and mother nature is well and truly awful.

The filmmakers are aware of this natural fear is. The kind of fear sensible liberals, progressives and conservatives in the modern age have tossed away. Bigelow and co are right. Fear is not an option, but sometimes we need to experience that fear, even just through the medium of film, to understand just how capable of terror we truly can be.

Using a style she first adopted with The Hurt Locker (2008), director Kathryn Bigelow deployed three or four cameras at a time, keeping them in constant motion around the actors. Bigelow preferred to light the entire set to give the performers more flexibility to move around. She didn’t block a scene for the camera by plotting out a series of close-ups and wide shots, instead filming everything in a few takes to keep the emotions as raw as possible. “After two or three takes, I have it,” she said. 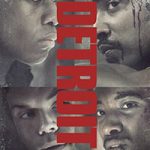