Karyn Kusama’s film Destroyer highlights an ongoing trend of Australian actors working in Hollywood that are unable to disguise their accents (see 2018’s Mary Queen of Scots and anything Sam Worthington).

In an unexpected turn for the usually refined Kidman, who has in recent years continued a string of supportive mother roles a la Lion (2016) and Boy Erased (2018), Destroyer follows Erin, a detective hardened by a sting gone wrong that is thrust back into its investigation with the knowledge of its ring leader’s resurgence.

In a role which requires brutish-toughness, Destroyer sinks or swims on the performance of its lead, with Kidman’s efforts feeling more impression than dangerous, delivering most of her lines frustratingly in a whisper as if to appear as damaged.

Actors in the film come from the She’s All That (1999) school of transformation where their commitment to ugly is still presented as beautiful, with Kidman looking as if she borrowed her husband Keith Urban’s chestnut brown hair and country-star leather jacket. The daughter-mother side-plot is unengaging and cliché; Kidman’s interactions with those from her past feeling akin to The Bride from Kill Bill (2003), with the excitement of high-strung fight sequences replaced with obnoxious, over-the-top dialogue that sees Nicole’s Kidman presumptuous actions – which puts her and her family in danger – celebrated as female empowerment.

Destroyers’ plot is fine if not lacking anything new other than being led by a female, with Erin’s partnership with the altruistic Chris (Sebastian Stan), despite its brevity being the only relationship that works (their corroboration scenes question whether their relationship is romantic or professional and are delivered with much tenderness). The convergence of investigation and murder-mystery elements are tied up impeccably but are followed up with a predictable conclusion that is embellished with existential elements that feel belonging to another film.

A hardened LA crime-drama, Destroyer is sold on the premise of a gritty Nicole Kidman performance, which to the irony of the title of the film, requires fixing.

Nicole Kidman stated that she got the flu during filming, but powered through and tried to use it in her performance. For the final scene in the movie with her character’s daughter, Kidman said she was so sick while filming she could “barely stand.” 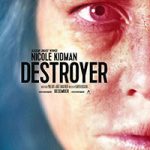