‘Deadpool 2’ is an Exhilarating, Yet Exhausting Sequel – Review

By Nick Janks in Reviews 2 years ago

After experiencing a traumatic event, Deadpool (Ryan Reynolds) crosses paths with the young super-powered mutant Russell (Julian Dennison), whom he reluctantly agrees to protect from a new threat from the future; a technologically enhanced soldier known as Cable (Josh Brolin). Deadpool’s values are tested along the way, as he forms a tumultuous bond with the boy, while killing bucketloads of enemies in the process.

Director David Leitch and his team try hard to bring the grounded, human elements of the story to life, and succeed for the most part. These altruistic themes are often overshadowed by the film’s over-the-top action and endless attempts at humour however, as the filmmakers find it difficult to strike a good balance. The first Deadpool film is partly to blame for that, as it set a precedent with its unique, comedy focused R-rated take on the genre. Following the success of the first film, producers may have assumed that fans wanted a bigger, bolder, more vile, more humorous sequel – and that is what fans have been given, though not without some trade-offs.

On the humour side, we’re treated to a constant barrage of witty remarks from our protagonist, along with constant pop-culture references. It’s often hit and miss, and anyone that hasn’t been keeping up to date with the last decade’s (and more) worth of pop-culture history will likely be left scratching their heads. Thankfully, the jokes and references that do hit the mark, hit hard and hit well. This is where the writing works both for and against the film. For every laugh-out-loud moment of dialogue is another ‘meh’ moment to match it. The dialogue is not the only type of humour we’re treated to though, as there is also plenty of visual and physical comedy, which works well in the context of the story. A slew of new characters have been introduced in Deadpool 2, from Josh Brolin’s long-anticipated debut of comicbook fan-favourite Cable, to rising star Julian Dennison’s Russell, to Zazie Beetz’ X-Force team member Domino, to name a few. Brolin does a great job as Cable, bringing a ferocity to the battle-worn character that only Brolin can. Cable’s motivation and background are touched upon in the narrative, though he could have used some more exploration. The same could be said for all of the new characters in the film (of which there are many), but its a juggling act, so the lack of development there can be forgiven. Even so, new characters like Beetz’ Domino won’t be easily forgotten, as she’s easily one of the highlights of the film.

Deadpool 2 has upped the ante in a big way from its predecessor. The action is more electrifying, the humour more crude, and the violence as gruesome as ever. There are moments that will make you laugh, moments that will make you cringe, and moments where you may genuinely shed a tear. It’s what anyone could ask for in a movie, as long as you’re willing to sit through the barrage of wisecracks. The film is essentially a spoof of the superhero movie sub-genre, and like most spoofs, some jokes will work and others won’t. The entertainment factor however, can not be denied here.

It was announced in October 2016, that Tim Miller would not be returning as director for this sequel. He decided not to return due to mutual creative differences with lead actor Ryan Reynolds during pre-production of this film. Miller later stated that he left the sequel because he “didn’t want to make some stylized movie that was 3 times the budget”, and wished to create the same kind of film that made the first one a success. 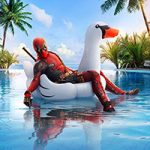