See an unrecognisable Gary Oldman as Winston Churchill in Darkest Hour; a career-defining role that earned the actor his first-ever Golden Globe nomination and win.

In Darkest Hour, director Joe Wright, best known for Atonement (2007), portrays the politics of war through the lens of Prime Minister Winston Churchill’s appointment in May of 1940. Faced with imminent invasion by Nazi forces, Churchill must decide whether to negotiate a peace treaty with Hitler or stand firm in resistance against his tyranny.

From the documentary The Finest Hours (1964) to last year’s blink-and-you-missed-it Churchill (2017) with Brian Cox in the title role, the life and achievements of Winston Churchill have been receiving the Hollywood treatment for decades. But if you are expecting a play-by-play of his rise to power then this isn’t the film for you. Darkest Hour focuses on a single month in the early days of World War II, and assumes audiences have a great deal of historical knowledge. The trouble is that this assumption is both the film’s strength and weakness.

Throughout the screenplay writer Anthony McCarten, who received an Oscar nod for The Theory of Everything (2014), refers to events that shaped how we view the Prime Minister. It’s so subtle in parts though that you’ll likely miss the significance. Take for instance the scepticism of King George VI towards Churchill, played by Ben Mendelsohn (arguably one of Australia’s best exports). The film suggests, in a brief statement, that this was because Churchill had publicly supported the marriage of King Edward VIII to Wallis Simpson and subsequent abdication. Are audiences expected to comprehend the weight of this? More than likely, it serves as a hidden gem for those who are well acquainted with British politics.

The visuals of Christopher Nolan’s Dunkirk (2017) will be front of mind while watching this movie. Nazi forces have just invaded France and surround British and allied soldiers. The scenes between Churchill, Neville Chamberlain (Ronald Pickup) and Viscount Halifax (Stephen Dillane) create a sense of urgency as the fate of those soldiers stranded on the beach at Dunkirk become dire. Pressure to engage in peace talks is overwhelming. Where Dunkirk gives us intimate realism, Darkest Hour gives us context. But without Dunkirk would Darkest Hour be as successful at building tension? Perhaps not.

Actress Lily James plays a typist by the name of Elizabeth Layton who begins working for Churchill. Her character is in the mix as a way of depicting the ‘average’ person – the ones whose lives are intimately affected by war. There is a real strength in the scene between Layton and Churchill where the audience discovers her brother was among those retreating to Dunkirk. While Darkest Hour is hardly a contender for Best Film, the acting is something else entirely. Biopics are especially tricky with a well-known actor in the lead as audiences are often waiting for them to slip up. But you won’t find any missteps here. Oldman’s transformation is impeccable and encompassing of even the smallest detail. For a year, he surrendered every waking minute to becoming Winston Churchill – immersing himself in newsreel footage and working on his own to create the voice. The result is utter perfection.

Despite having refused several projects, Oldman admits that he’d always been interested in playing Churchill. But the logistics of a physical transformation seemed too large. Special effects and make-up artist Kazuhiro Suji, whose previous work includes Planet of the Apes (2001) and The Curious Case of Benjamin Button (2008), was seduced out of retirement to work on the film. A suggestion made by Gary Oldman himself. The prosthetics are so well-done that you’ll wonder why there was a concern in the first place.

Churchill, 65 at the time he was appointed Prime Minister of the United Kingdom, is played like a man born in a bad mood. Rather than an idealistic representation, the film is fair in its depiction of a Prime Minister thrust into a position of power at a time when the nation was fearful, and support from his political party was scarce. We see warmth in his relationship with his wife Clementine (Kristin Scott Thomas) who softens his edges; in his laughter about his V for Victory sign and in his tears as he speaks with the British people on a train. It’s a shame that the latter example was a complete fabrication created for the film to illustrate how he carried the sentiment of the nation.

Surprisingly, while Oldman does describe this as “the role of a lifetime”, he doesn’t consider it his most challenging. In fact, it was following in the footsteps of Alec Guinness when he played intelligence officer George Smiley in Tinker Tailor Soldier Spy (2011) that he credits as giving him “bone-crushing stage fright”.

Darkest Hour, as Oldman describes it, illustrates that words and actions can change the world. The elephant in the room though is that people aren’t talking about this movie because of its strong message. All the buzz centres on Gary Oldman’s performance. And in that vein, rest assured that he’s on track to win the highly coveted Academy Award later this year.

Gary Oldman spent over 200 hours in makeup undergoing a radical transformation that necessitated ‘fattening’ his body with prosthetics weighing half his own weight. 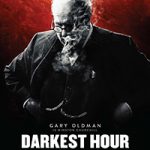