Dark Diamond is a low budget, rough-around-the-edges crime thriller set in Antwerp, Belgium, that slowly builds tension and leads into a messy climax, showing that a decent story can overcome the typical Hollywood churn-out and special effects.

Dark Diamond looks and feels like it was shot in the 60’s and 70’s era that belonged to such crime classics as Get Carter, The French Connection and so forth. While it’s not even close to being in the same class, it does elude a certain seediness and raw feeling that most films shy away from nowadays. And it works in its favour.

Our protagonist Pier (Niels Schneider), a low level thief has his world turned upside down when he learns that his father, whom he hasn’t seen since childhood has passed away, which forces him to confront the family he has purposely kept his distance from, since they were responsible for his father’s downward spiral, leading to his abandonment of Pier as a child.

Since the family business is in diamonds and business is booming, it is here Pier starts to plan his revenge. After informing his boss of his intentions and what kind of money can be made, he sneaks his way into a diamond cutting job in order to gather the intel he needs to rob them of millions. But as usual things never run smoothly, as obstacle after obstacle presents itself, which includes keeping his snaky cousin Gabi (August Diehl) close by in order to stay on the inside, or keeping his affections for Gabi’s girlfriend Luisa (Raphaële Godin) at bay. All this plays its part and serves the story well.

The story itself unwinds quite well, and sometimes requires a little patience, whilst the acting is middling to good at best. Niels Schneider who plays Pier does fine but seems slightly out of his depth in carrying the film, but coming across as an average everyday man might have been intentional casting. The supporting cast is adequate, especially Gabi, played by August Diehl (cinephiles will recognise him as the Nazi in Inglorious Basterds that calls out Michael Fassbender’s drink order) who keeps the tension thick on Pier’s plans.

Whilst it’s no masterpiece, Dark Diamond does hit all the marks it intends to, and if you’re after something a little raw and, like a diamond, a little rough around the edges, then this film may just be for you.

Dark Diamond will be screening at the Jewish International Film Festival (JIFF), for session times and tickets, please go here. 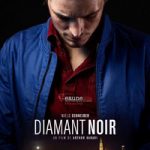