Creep 2 is the follow-up to the reasonably successful first film Creep (2014), which was about a man who answers an ad on the internet for a one-day job of filming a subject who turns out to be a serial killer.

Here the sequel plays out almost the same way, with the twist being the villain openly admits to being a murderer and wants his life documented before he dies.

Sara (Desiree Akhavan) has her own internet show where she visits and interviews people who have shut themselves off from society, trying to get to an insight into their lives. Not fully satisfied with her results, she stumbles across an ad that offers $1000 for one day’s work. An offer too good to refuse leads her to a remote cabin where she meets Aaron (a very good and unpredictable Mark Duplass), whom she is supposed to film. He immediately admits to being a serial killer, even showing her footage of him actually murdering someone. He convincingly tells Sara he has no intention of harming her, only having her document his life over the course of a day. Obviously torn between wanting to leave, she decides the job will boost the ratings of her show and reluctantly stays on for what is a twisted mind-game experience. It’s also here when Mark Duplass’ performance really starts to shine as he goes from charming to menacing in a matter of seconds. His performance also elevates what is now a somewhat tired formula of the found-footage genre. Also the fact that Sara’s ambition to garner fame and fortune off of her subject by continuing to film intensifies the situation even further, justifying what would normally become irritating and irrational to the storyline of this ilk.

So it’s safe to say that if you enjoyed the first instalment enough, Creep 2, although unnecessary, on paper works just as well, if not slightly better than its predecessor. In fact if you haven’t seen the first movie, it would pay off handsomely to watch them back to back for a night in, if you’re in the mood for some non-thought provoking, but entertaining horror.

At around 50 minutes Aaron is playing pool, there is a mural of a castle behind him. That castle is Neuschwanstein Castle located in South Bavaria, Germany. 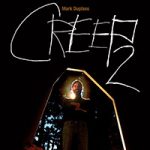