‘In This Corner of the World’ – Review

Sunao Katabuchi’s In This Corner Of The World is a Japanese animated film set in and around Hiroshima during World War II.

After moving to the foreign, rural town of Kure, eighteen-year-old Suzu (Rena Nounen) must learn to manage her responsibilities as a new bride and daughter-in-law, while coping with the repercussions of war.

There aren’t many ways I can express further plot-points without trivialising the beauty of this narrative, so the most valuable opinion I can offer is this: the film is enriched with subtle details in its simplicity.

I also want to preface this review by mentioning if you’re anything like me and are predominately accustom to Hollywood-style storytelling, these subtle details may fly over your head, and initially leave you feeling somewhat bored and unimpressed with the slow pacing and simplicity of the film. At first I felt myself growing impatient with the rate at which the story was unravelling – the impact of a lifetime’s worth of action sequences, excessive dialogue and hyperbolised drama was beginning to rear its ugly head. But somewhere between 30-45 minutes into this film, I stopped anticipating major plot-points or waiting for a prominent incident to kick-start the hero’s journey, and found myself adjusting to the film’s leisurely and lifelike pace. That’s when I noticed subtle nuances hidden in the plight of Suzu’s existence, and how it was used to explore the narrative’s most fundamental question.

How do you find meaning in the direst circumstances? Even in a world of complete terror – bombs dropping left, right and centre – Suzu safeguards her imagination and exudes a childlike innocence, whose indifference to the war is somehow both admirable and heartbreaking. Her absent-mindedness, which is referred to on multiple occasions isn’t to be mistaken for naïveté, but rather a natural inclination towards peace and freedom.

In This Corner Of The World is a breath of fresh air, softly hinting that we all have the ability to extract beauty from pain; that meaning emerges from the meaning we assign to our individual existence, and not even the atrocities of war can break through the harmony within ourselves.

In This Corner Of The World is based on the manga series of the same name, which ran from 2007 to 2009 in Weekly Manga Action. 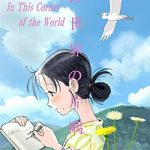