In The Commuter, a man’s family is held hostage and to ensure their safe return, he’s forced to follow the kidnappers every instruction – hardly a new concept by any stretch of the imagination.

In Nick of Time (1995), Johnny Depp must kill a politician to save his kidnapped daughter. With her father’s life in danger, Rachel McAdams is coerced into an assassination plot in Red Eye (2005), and Firewall (2006) sees the kidnappers pressure Harrison Ford to rob a bank. Yes, we’ve seen it all before. In The Commuter, actors Liam Neeson and Vera Farmiga attempt to give the premise new life.

Liam Neeson is Michael MacCauley – a husband, father and Ex-NYPD police officer. After losing everything in the global financial crisis of 2008, he now commutes to his job as a life insurance salesman in New York. A commute he’s been making every day for the last ten years. He and his family live paycheck to mouth and are anxiously saving for their son’s college tuition. Unfortunately, life has other plans for MacCauley, and he is let go from his job – without reason no less. Perhaps the first red flag signalling that events are not as straightforward as they seem.

After commiserating with Alex Murphy (Patrick Wilson), his ex-partner of 7 years at the NYPD, he boards the commuter train bound for home. There MacCauley is approached by ‘Joanna’; a mysterious woman played on-point by Vera Farmiga. Although it must be said, a rather one-dimensional character that seems an odd choice for the otherwise versatile Farmiga. With this seemingly chance encounter, the film’s entire plot is laid out. She proposes an experiment: Identify who doesn’t belong on the train and become $75,000 richer. Simple. What could go wrong? MacCauley quickly discovers that this isn’t just a hypothetical request and that lives are at stake – including that of his wife and son. Much, if not all of the action that follows happens in the one place, like Phone Booth (2002) or Flightplan (2005), with MacCauley patrolling the train, using his powers of deduction to identify the odd man out. The film strikes an uncanny resemblance to 2014’s Non-Stop, that saw Neeson play an air marshal on a flight from New York to London who must identify who’s threatening to kill passengers. In fact, Non-Stop screenwriter Ryan Engle worked with first-timers Byron Willinger and Philip de Blasi on this very project. Substitute the plane for a train, the air marshal for an ex-cop, and you’ve got yourself The Commuter. Some might be inclined to cut Willinger and de Blasi some slack as newcomers, but let’s not forget that Argo (2012), The Hurt Locker (2008), and Good Will Hunting (1997) were all debut screenplays.

The Commuter is the fourth collaboration between Neeson and Director Jaume Collet-Serra, who previously worked together on Unknown (2011), Non-Stop (2014) and Run All Night (2015). All three films have the generic action-thriller blueprint down to a science, and this fourth offering doesn’t attempt to serve up anything new. While there is a definite audience for these films, the mere mention of Neeson/Collet-Serra in tandem has some serious work to do before it’s synonymous with the status of the DiCaprio/Scorsese pairing.

The opening/title sequence sets the tone of the film while trying to create exciting shots of MacCauley and his wife and son as they go about their morning routine. The sharp and short editing seems like an attempt to simulate how we see things when looking through the window of a moving train, but the result is dizzying and off-putting. From there, we’re treated to a 30-minute setup and backstory, which is somewhat cumbersome considering it may have been more effective to weave these details throughout the film, creating ‘a-ha’ moments for the audience.

Okay, so perhaps the question we need to ask ourselves is what makes a solid action flick? It doesn’t need to be particularly believable, but should ignite our senses with a kick-ass combination of fight sequences, car chases (or train), and shoot-offs at the very least. The Commuter doesn’t disappoint in this department and manages to build in momentum as it approaches its final destination. Secondly, we need a hero worth rooting for as they attempt to overcome an obstacle before the film’s end. Liam Neeson is a 65-year-old playing a 60-year-old who seems to defy age – keeping up with the very best of them. Case in point is when he cheats death by rolling from underneath the moving train only to leap back on. Yes, it’s incredibly unrealistic but, as mentioned, ‘believability’ is not a box the film needs to check.

If there was ever an actor typecast as the result of one successful film, it’s Liam Neeson. 2008’s Taken was an unexpected hit with audiences and led to a series of fast-paced action films for the actor. Gone are the days of seeing Neeson front-and-centre in high-quality movies like Kinsey (2004) and Schindler’s List (1993). Despite the lacklustre storyline, Neeson is captivating and proves, yet again, that he can carry almost any film in the genre.

Aside from Neeson as the lead, the addition of Breaking Bad (2008-13) and Better Call Saul’s (2015-) Jonathan Banks is likely to be a strong drawcard. Although if this is your reason for watching the film I’d caution against it for reasons that will become apparent if you do.

The ‘bad guys’ are well-prepared and go to meticulous lengths to keep MacCauley on the train and focused on doing “this one little thing”. But this begs the question – with the ability to set in motion such an elaborate series of events, surely they had the means to find the ‘target’ themselves? Why even involve the third party? If the reason was to create a fall-guy, then this idea wasn’t thoroughly thought-out. Perhaps it made sense on paper, but it doesn’t translate to the screen.

By the end of the film, you’ll likely have no clue what’s going on. All the moving parts come together but struggle to form a complete picture – resulting in a mediocre conclusion. Haven’t we learned our lesson from the disappointing action flicks that have come before this one? With The Commuter, the best advice I can give is ‘just go with it’.

Liam Neeson and Sam Neill were both contenders for the role of James Bond in GoldenEye (1995), which eventually went to Irish actor Pierce Brosnan. Neill was also considered for Bond in The Living Daylights (1987). Additionally, both actors starred in a Steven Spielberg film in 1993 (Schindler’s List and Jurassic Park). 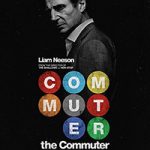