Ever wanted to see a hipster Elijah Wood scream absurdities at the corpse of his deadbeat father? Well, Ant Timpson delivers just that and other kooky scenes in his first feature film, Come to Daddy.

Opening with a line from Shakespeare followed by a Beyonce quote, Come to Daddy was never going to be your run-of-the-mill family reunion film. Delightfully dark and creepily comic, this quirky thriller film devolves into a madly chaotic fight for answers.

Pampered and privileged music exec Norval (Wood) arrives at the remote coastal cabin of his estranged father. Greeting him at the door, his father (Stephen McHattie) is barely capable of mustering a smile at the sight of the son he has not seen in thirty years. The pair attempt to rekindle some resemblance of a relationship, but something is off. As Norval opens up about his struggle with alcohol dependency, his father opens a bottle of wine and slowly pours a glass. When Norval attempts to regale his father with stories of his career, the older man seems to relish in calling his bluff. Norval and his father agree to go for a swim, but a rock comes pelting out of the blue towards Norval’s head.

The house, looking like a ‘UFO from the 1960s’, juts out across the wild ocean and makes for the perfect setting for this unsettling story. At night, Norval lies awake listening to his father muttering into the phone, and the house begins to reveal clues that all is not what it seems. Come to Daddy is a slow burn, but it is well worth the wait. Edgy camera angles utilized by cinematographer Daniel Katz create a surprisingly beautiful viewing experience despite the brutal violence. Featuring a motel of swingers, decades-old crimes coming back to bite and an unwilling protagonist, Come to Daddy is heavy on the plot twists.

RELATED:  'The Mauritanian' - A Weak Legal Drama Saved by a Key Performance

Elijah Wood is hypnotic as the recovering alcoholic who lives with his mother and desperately wants to reconnect with his father. With his severe monk-like haircut, tiny mustache, Asian symbols tattooed behind his ear and gender-neutral clothing, it would have been easy for him to fall into a stale hipster stereotype, however, his portrayal of Norval is nuanced. Norval comes across as both an entitled millennial and a relatable adult trying to process his childhood trauma in an extreme situation.

Despite the absurdity of its story, Come to Daddy follows a completely logical plot. Each event escalates into the next, keeping Norval on his toes and audiences on the edge of their seats. Squeamish viewers will have to look away in the third act, but the gruesome elements of the film are handled with wit and humor.

Come to Daddy is now available to watch on demand at iTunes, Google Play, Telstra, Fetch, Umbrella Entertainment, and it hits Foxtel on Demand from 15 April.

When it came time to cut the film, Timpson’s desire for a “simple, linear narrative” made editor Dan Kircher’s job a little easier – and a lot more fun. 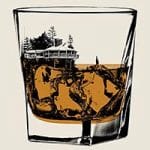