Colossal Fail? No. Just a Minor One – Review

Nacho Vigalondo may sound like a fake name one would use pretending to be a Mexican viagra salesman – but this Spanish director has proved himself to be a competent filmmaker, who deserves little derisive laughter for his namesake.

Having achieved a few ethereal likes from me, merely for his contributions to The ABCs of Death (2012) and Open Windows (2014), his 2017 film Colossal, which debuted earlier in the year, has proved to be a fascinating and original take on the Monster Movie, which unfortunately falls a little flat towards the end – but is definitely worth the watch.

Without giving away too much of the plot (because if you didn’t catch it this year, you should definitely go and track it down), the story revolves around regular misfit and alcoholic Gloria, played coolly and suavely cynical by Anne Hathaway. After breaking up with her highly strung boyfriend, and falling off the proverbial wagon, Gloria’s life seems like it can’t get any worse. Then she hooks up with fellow alcoholic Oscar (Jason Sudeikis), who runs a bar, then subsequently gives her a job as a waitress and helps her set up the large house vacated by her absent parents. Things seem like they might turn out alright, until after a huge night of binge-drinking, Gloria and Oscar, along with the rest of the world, awake to find reports of chaos on the news, discovering that an enormous Kaiju monster has attacked Seoul, South Korea, overnight.

Now what makes this film unique are the strange character discoveries which surround these monster attacks, that feel very much in touch with the modern era; virtual technologies and humanities slow realisation of our effect on the planet. I won’t give away any of the surprise reveals of the film, but suffice it to say that, as Vigalondo has made a name for himself with low budget, often bizarre films – Colossal is no exception. Admittedly, we’ve seen a fair share of clever twists and intelligent additions to the monster movie genre in the last decade or so; the found footage of Cloverfield (2008), to the trope satirising The Cabin in the Woods (2012), and the powerfully scary The Descent (2005-09) franchise. The juxtaposed settings of America and South Korea put this film in league with cross continental Death Note (2017), and it personally reminded me (in the first quarter of the movie) of Timo Tjahjanto’s brilliant contribution to the V/H/S/2 (2013) compilation, ‘Safe Haven’, through its Asian flavoured terror. Unfortunately, It was the way the film played out to its climax that disappointed me, so that I almost feel – a director who was more of a horror purist might have achieved more.

Monster movies will always inevitably be slightly camp and silly by nature of their enormous excesses and adolescent fantasies – boy’s toys smashing up cities. With Rampage set to be released next year, based on an old 80’s Midway game that was damn cool, but possibly the most ridiculous premise for a movie ever considered – the genre is fortunate to have Vigalondo’s contribution. The designs for the monster are really cool, and aesthetically this movie kicks ass. What is truly sophisticated about Colossal however, is Vigalondo’s ability to squeeze so much more out of this story than what appears to be there on the surface. The relationships and relatable twenty/thirty-something drinking-buddy circles of Gloria and Oscar are the true weight of the film, along with a well tried plot, with driven characterisation, and great acting from Hathaway and the supporting cast. The monsters in this case, are almost an allegory for the drama and life problems of the characters involved. In this way, for monster movies it shares credits with the infamous golden age screenwriter Val Lewton.

Lewton, who was famous for the fantastic intellectual monster thriller Cat People (1942), a parable of American paranoia, was known for turning conventions on their head and not settling for writing simple monster flicks. Lewton is alleged to have famously walked out of a board-meeting disappointed that he had his hands tied to direct the campy, I Walked with a Zombie (1943) flick, only to return the next day with a plan to intellectualise it, declaring: ‘We’ll do it as Jane Eyre with Zombies’. I feel positive Val Lewton would have approved of Pride and Prejudice and Zombies (2016), and no doubt he would’ve been satisfied with Colossal too. It’s always nice to see an extra layer of depth behind a film like this.

It’s almost disappointing to come out of this film, wishing for what might have been. Colossal feels so uniquely strange at the outset of the film, almost like an instant cult smash the likes of Donnie Darko (2001), but by the end, it has faded out to something more akin to the hackneyed sequel to that cult hit, S.Darko (2009).

I can’t put my finger on why this movie doesn’t quite stand alone as an enduring masterpiece. Hell, maybe you’ll disagree with me. There’s so much to love in this movie, and it begins with such unparalleled potential. It’s just for me, the ending was as vast a bungle as NASA accidentally taping over the footage of the moon landing.

Of course, there is no use marvelling at what could have been. The wasted potential of this movie will be preserved in film history, like the early Dutch explorers who nearly discovered Australia 100 years before the British, but rather hastily wrote it off as a baron and useless desert.

In this case we can only marvel at how different things might have been.

Anne Hathaway was in the second trimester of her pregnancy while filming the movie. 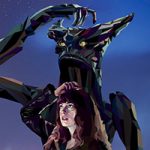