Written and directed by Russian filmmaker Pavel Chukhray, Cold Tango is the story of a young Jewish man whose love for a woman is obstructed by the atrocities of war, politics, and the complexities of human emotions.

After narrowly escaping from the claws of the German army, Max (Rinal Mukhametov), returns to his hometown only to discover that his house has been occupied by a new family, while his mother is presumed to be dead.

Entranced by the daughter of the foreign occupants, Max utters his declaration of love and commitment to Laima (Yuliya Peresild), just moments before the calm turns to storm. When a disturbing chain of events prevents Max from to living up to his word, his chances of a life with the breathtaking Laima are painfully obliterated as their journeys are divided into two. That is, of course, until a secret from the past entangles Max and Laima’s paths once more.

The narrative can almost be split into two parts: Max’s backstory, and the events that take place some odd fifteen years later. The most valuable and emotionally charged aspects of the film occur during Max’s childhood, when we witness the aftermath of Nazi soldiers ripping innocent children from the arms of their mothers and taking them away in order to be killed.

RELATED:  'Another Round' Review - A Drunken Cautionary Tale

Cold Tango exhibits a small handful of scenes that are exceptionally gut-wrenching and difficult to digest, but the acting and cinematography unveils itself in a way that acquires the appropriate attention and respect that is deserving of its historical context.

Sadly, all of the fist-clenching and seat-gripping intensity comes to an untimely end just a quarter of the way through, when the film flashes forward to present day. Several years have passed and Max returns to his hometown, brooding over the lost love of a woman whose tumultuous past has reduced her to nothing more than an empty soul masked by physical beauty.

The jump in time creates a disconnection between the events of the past and present, and leaves you feeling somewhat unconvinced that Max’s love is powerful enough to motivate his search for Laima after so many years have come to pass. This is partly because the audience is deprived of any insight into Max and Laima’s post-childhood experiences. Pivotal moments that should have worked towards developing an authentic relationship between the two, felt shallow and incredibly contrived from the get-go.

Although Peresild transforms herself flawlessly into the melancholic caricature that is required of her, the artistry is ultimately letdown by an underdeveloped romantic storyline and superficial character arcs. Details of Laima’s disastrous downward spiral, or at least additional flashbacks that strengthen the authenticity of Max’s infatuation would have helped push the narrative into a deeper space.

While Peresild’s outstanding performance deserves special mention, it’s worth noting that the majority of the cast deliver compelling and realistic performances. These performances are further enhanced and brought to life by the contrast of beautiful cinematography and its post-war visual landscape – a viable backdrop for a tumultuous romance that the film simply falls short of deploying.

Tragic love stories are a hard sell in the modern era, and while I’m not convinced this film is an exception, its supporting production elements manage to construct and deliver a somewhat entertaining and respectable film.

Cold Tango is screening as part of the 2017 Russian Resurrection Film Festival across Australia. Click here to view the lineup of films and book tickets for your city. 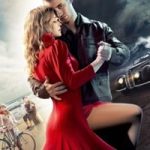