As Earth reaches the end of its energy supplies, and the world teeters on the edge of total collapse, a group of scientists are sent to the space station Cloverfield in hopes that they can unlock a source of infinite sustainable energy. While there, something goes wrong, and they must unravel the mystery to save both themselves, and the Earth below.

The Cloverfield franchise has been an interesting one. The original Cloverfield (2008) was one of the first entrants in the new wave of found-footage films, the second was famous for being made in complete secrecy, and only being announced two months before release. In a clear effort to ramp up the notoriety of the franchise, The Cloverfield Paradox was announced with a trailer in the most recent Super Bowl – and released immediately afterwards on Netflix. While this is bold and intriguing, it’s a crying shame that this film won’t see a theatrical release. Netflix can claim that their platform stands alongside the theatrical experience, but it’s simply not true.

A massive amount was lost from this film by relegating it to an eternity of consumer-controlled presentation. It’s as plain as day from the filmmaking and production value, that the filmmakers had every intention of releasing this in theatres. The grand set pieces, vivid body horror, and sweeping shots of the space station engulfed in a sea of stars are diminished severely by the home viewing experience. It’s disappointing that the allure of a Netflix paycheque, and cool-points gained from the ‘anti-hype’ surrounding the release overshadowed the integrity of the experience. That being said, the film is still viewable, the performances are still wonderful, and the tension is still high. The Cloverfield Paradox borrows from sci-fi properties new and old; with elements from Alien (1979), Event Horizon (1997) and Life (2017), it manages to pay homage while still remaining original. Some of the set pieces are truly unique, and it really embraces the chaos and absurdity of its premise. And in many ways, it is absurd in the true sense of the word; some of the events that befall our characters are random and inexplicable. While nothing is truly chaotic, it is closer to chaos than we typically see in a blockbuster (if this even is a blockbuster). It also touches on the geopolitical elements of a world running out of energy, and the strain that such forces would put on a group of people, all from different countries, all living in close quarters for an extended period.

Despite all of this, the film lacks a certain grandness. Part of this is down to the aforementioned presentation, but most of it is due to the story and the execution. The fact that we don’t really get to know our characters until the film wants us to care about them is a large issue, and a missed opportunity for a richer story. Enormous revelations come to light just a few seconds before they become relevant to the story, and the survival of our characters. This robs us of the build-up, the tension, and the emotion that contributes to a twist or a shock or a gut-punch. Further on from that, the chemistry between the actors isn’t strong enough to compel us to invest. When someone dies, there is no pang of sadness or sting of loss. We feel things because the people on screen feel things; if the characters don’t have the rapport with each other that is necessary to make us feel, then we won’t.

The Cloverfield Paradox does however succeed in many other ways. The thrills and scares are there, and the intrigue certainly is too. While we don’t get the adept and riveting insight into madness and humanity like we did in 10 Cloverfield Lane (2016), we do get a solid and enthralling sci-fi thriller.

John Krasinski was in talks to join the cast, but dropped out to lead Jack Ryan (2018). 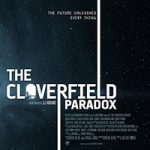