Alex Gibney’s latest documentary Citizen K is educational yet unsatisfying. This documentary tries to fit Russian oligarch Mikhail Khodorkovsky’s story into 2 hours (which is definitely not an easy task) – from his rise to financial power in the early days of capitalism to facing off and creating a nemesis no one would dare to touch in Vladimir Putin.

The story takes us from the beginning when the Soviet Union collapsed and the red flags were replaced with tricolored ones. Mikhail Khodorkovsky, a clever businessman, pioneered his first ventures in an era he coined as ‘Gangster Capitalism’ – a time which evoked Russian people’s confusion as they switched from a communist state to a capitalist one.

After establishing himself as one of the richest men in Russia, along with seven other oligarchs, it was all too easy to play the government to their favor during the Yeltsin days. That is, of course, until Vladimir Putin came to power, and forced the oligarchs out of politics. Time passed, and Khodorkovsky became more vocal about government corruption and democracy. With that, he created an enemy in Russia’s most powerful figure, which ultimately led to a series of unfortunate events. These events included countless murders, arrests, charges, power plays, and the inevitable imprisonment of Khodorkovsky.

Citizen K is like a thoroughly educational film about early-day capitalism in Russia, the consequences of the events that took place during that time, and how it shaped modern-day Russia. The editing and sequences are very organized and to the point, which makes a complicated story very easy to follow. However, the documentary feels biased towards a shadier figure than what the protagonist is usually portrayed as. Khodorkovsky is seen as a hero in his own documentary of course, and perhaps that was necessary as it seemed like the oligarch ran out of media power to voice his own perspective of the story. But this gives an unsatisfying feeling towards the story, as it felt like Alex Gibney lost track of what the true purpose of the documentary was, with the tone shift apparent one hour into the film.

For those of you that enjoy the highschool drama-like plays of politics, this documentary film is a juicy piece to get your teeth into. My favorite quote of the film was Khodorkovsky citing a common Russian saying “The strictness of Russian Laws is compensated for by the lack of obligation to follow them”. I felt like that saying summarizes a crucial factor in Russian politics – you can play with the rules and dodge the system until you strike into someone who plays the game better than you. 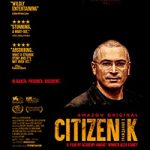