The story follows the daily life of judge Fiona Maye (Thompson), who tends to deal with cases where a hospital will want to do one thing, versus a parent who’ll want to do another. For instance, a hospital may wish to separate conjoined twins in order to save one, while the parents will want to keep them together in order to try and save both of them.

Right away, audiences are shown that Maye’s personal life has fallen by the wayside due to the seriousness and demand of her job. What is portrayed so well by Emma Thompson is how sometimes people simply shut off their emotions in order to get the job done. This is depicted well because audiences are shown the moments in-between the act.

As an example, most films would jump from court scene to court scene, however, The Children Act shows the mundane happenings that go on before stepping out into the courtroom such as making a coffee or listening to a bad joke from a co-worker. It is these moments that really make the film and that give insight to how judge Maye is really feeling despite her matter-of-fact appearance. Maye is challenged when her marriage becomes up-in-the-air and when dealing with a particular case involving a 17-year old Jehovah’s Witness with leukaemia. Following along with this journey is extremely thought-provoking, making this a great movie to watch and then discuss with loved ones. While this is certainly an interesting watch, audiences shouldn’t expect a climatic event as this is simply a film about someone’s everyday life.

What is enjoyable about this flick is how we see the court proceedings from the eyes of a judge. This is akin to A Star is Born (2018), where viewers get to see a concert from the eyes of those who are performing on stage. What some may not enjoy, however, is the lack of “action” as well as the pace.

Despite this, The Children Act is still an intriguing watch and has several small, clever moments that may produce a giggle or two. Overall, this is a great watch for a rainy afternoon or for those who are burned out from the never-ending onslaught of comic-book movies.

Despite only including one use of strong language (which is usually acceptable at ‘PG-13’), the film holds an ‘R’ rating in the USA – likely because of the somewhat sexual context of the line in which that language appears. This is the highest rating the film has received (requiring that children under 17 have parental accompaniment), with Canada’s ’14a’ coming the closest. 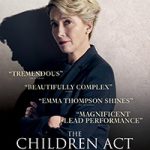