Ready for another ensemble cast of lovable idiots trying to do a thing behind the curtains of a bigger thing before people find out they aren’t really suited to do that bigger thing?

How about this time we chuck in some distracted French waiters, a failed rockstar live band, a narcissistic groom-to-be and miscellaneous minor players who somehow simultaneously learn life-changing lessons over the span of 18 hours?

Okay, that was probably a bit too harsh. C’est la vie! is definitely an entertaining French comedy, but it’s been done. The style of this movie, from the shaky hand-held cinematography following the chaotic crew leader, down to the free-form jazz drumming sound design, borrows heavily from 2014’s Birdman. Although knowing Western cinema, that was probably ripped off from some French New Wave vérité so full circle I guess. The good news is there are many gags and laughs to be had. Pierre is legitimately someone you want to punch square in the face repeatedly, but Lavernhe’s execution of his pompous eccentricities are endearing, bringing enough silliness to the character that you don’t feel irrational anger, only justifiable irritation. There is loads of witty banter and communication breakdowns for comedic effect, so C’est la vie! will leave you entertained.

The bad news is the character development. I get that we want each character to have some sort of self-reflection or an outcome that grows their vision. But there was just so much of it in this movie. Stop hedging your bets. It’s a comedy. We don’t need much. Make us laugh. Without spoiling the movie, the dozen or so character’s subplot conclusions were all crammed into a saturated final scene. It felt forced after so little time was actually spent in the movie.

But hey, I’ve never worked as a wedding planner. Maybe this is exactly the sort of stress that produces paradigm shifts in three-quarter day segments. And in the end, it is a pretty funny movie. So although it felt like there was perhaps a bit too much focus on every character’s storyline, it did deliver on the comedy, so maybe that’s all that matters. 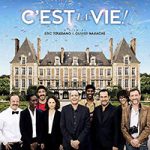