Bob (Dwayne Johnson) and Calvin (Kevin Hart) reconnect as adults on the eve of their twenty-year high school reunion. But before the reunion can take place, Bob drags a reluctant Calvin into a world of crime and international espionage.

Central Intelligence doesn’t do anything new. The action isn’t innovative; the comedy isn’t anything we haven’t seen before, and the plot is rather rote and formulaic. So why is it so watchable? It ultimately comes down to the charisma of the film’s leads.

Individually, Kevin Hart and Dwayne Johnson are possibly two of the most charismatic actors working at the moment. Combined, their undeniable chemistry is strong enough to turn a lacklustre film into something enjoyable.

However, the chemistry isn’t quite enough to make up for all of the film’s failings. In a world where films like The Raid and John Wick exist, it’s getting harder to excuse poor action scenes. Central Intelligence’s fight scenes look like the outtakes from a Jason Bourne film; choppy, shaky and sometimes unintelligible. In a film that is striving for a traditional, polished look, the frantic fights seem very out of place

Then there’s the issue of the plot. It’s basic, derivative, and the ending was extremely predictable. In any other film it would have been a painful crawl to the third act, when the film would finally reveal what you had already figured out. But Johnson and Hart’s performances – which are complimented by cameos from some of the biggest comedic actors going around – make the trip worthwhile. The first joint-venture between Warner Bros. and Universal Pictures after 20 years, since Twister (1996). 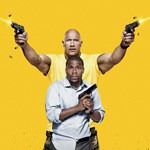