Capharnaüm opens with our protagonist Zain (Zain Al Rafeea), impossibly tiny in his handcuffs, suing his parents for giving him life.

Locked up in Lebanon’s notorious Roumieh prison for stabbing someone, Zain is launching a legal attack on his parents (who do not even know how old he is) in an attempt to force them into culpability for his childhood of abject poverty in Beirut’s slums.

The body of the film is recounted to us in an extended flashback. A camera follows a group of street kids running through the ramshackle streets with rifles taped together from cast-off pieces of timber and rubbish. The boys soar through the chaotic streets, laughing, fighting, smiling. This moment of play is then abruptly juxtaposed against Zain in a tiny, rundown apartment sleeping on a mattress on the floor with his countless younger sisters, listening to his parents have sex in the same room. Discovering that his favourite sister Samar (Cedra Izam) has started menstruating, Zain steals sanitary products and helps her hide the fact that she has come-of-age. He plans an escape for Samar and himself, however, she is sold off to their landlord’s son as a child bride – a marriage which has a dire outcome.

Furious, Zain gets on a bus with his possessions in a garbage bag, headed anywhere but the slum which robbed him of his childhood. He haunts a theme park, sneaking himself onto the rides and begging for work in the cafeteria. He catches the eye of Rahil (Yordanos Shiferaw), an undocumented Ethiopian woman working as a cleaner and hiding her baby son in the toilets during her shifts. Taking pity on the desperate, dirty boy, Rahil offers him shelter in her corrugated iron shack. Zain then looks after her son.

When Rahil is arrested, she must hide the fact that she is nursing, trusting that Zain will keep her baby safe. Zain is once again left to his own defences to navigate this world of deprivation and desperation while protecting a baby he comes to love as his brother. Filmed on location in Beirut’s slums, Capharnaüm’s cast is completely novice, with many of the actors acting out storylines which parallel their own. This is both sobering and humbling, injecting the film with a sense of authenticity which makes it an emotional viewing.

Zain Al Rafeea is captivating. A Syrian refugee, he is a force of nature. His eyes seem to hold the sadness of the whole world, and his portrayal of the feisty, embittered street kid is one that will not easily be forgotten. His portrayal of Zain is nuanced and deep, mesmerizing the audience. The rest of the cast also shines, with no hint that they lacked experience or training.

Although sentimental in parts, Capharnaüm is not a film which romanticizes this life of desperate poverty and neglect, creating heroes out of disadvantaged people. It is a film which foregrounds the anger of its characters at their situation. It provides a stark snapshot of a life many of us could never imagine. It does not hold back in its examination of childhood in the slums and can be quite confronting for a privileged audience.

Nominated for an Oscar, Capharnaüm is an ambitious film which deserves a standing ovation.

Capharnaüm is a fiction of which all the elements are things that Nadine Labaki has really seen and experienced during her research in the field. Nothing is fantasized or imagined, on the contrary, all that we see there is the result of her visits to deprived neighbourhoods, detention centres and juvenile prisons, where she went alone. 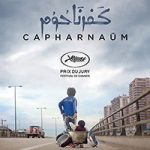