Butt Boy is a thriller, sci-fi, and comedy film directed by Tyler Cornack. The film’s title is as weird and irreverent as the story told.

Chip (played by Cornack himself, no less) has a dull, boring life. He works in IT for an off-brand company and is little excited about his soulless job and life in general. There’s no spark in his eyes, nothing seems to amuse him and he always speaks in a monotonous, unaltered tone. At home, his wife Anne (Shelby Dash) pretty much ignores him and only seems to have time for their baby or to go out with “the girls”.

A routine rectal examination of Chip’s prostate makes a twist in his life. The emotionless man finally feels something, and the pleasure derived from the doctor’s fingers up his ass triggers a new passion. Chip is desperate to feel this gratification again. When his wife doesn’t jump into his new fetish, he needs to fulfill his craving with something else. From the TV remote to the family’s cute little dog; several household objects start disappearing. His craving turns into an obsession and after completely losing control, Chip attempts suicide – and he survives.

Butt Boy then jumps nine years forward. Chip looks better. He is a regular at Alcoholics’ Anonymous meetings (even though his addiction is something different) and seems to have controlled his strange urges. But things get twisted with the arrival of Russell (Tyler Rice), a troubled and alcoholic police detective with greasy hair and a leather jacket who looks exactly like any movie detective. Russell joins the AA meetings and gets Chip assigned as his sponsor. But things don’t go as expected. Hearing Russell talk passionately about drinking kind of turns Chip on and makes him relapse.

Not long after, their paths are intertwined again. A kid has gone missing during a hide-and-seek game at a “Bring Your Kid to Work” day at Chip’s company, and Russell has been assigned the case. Russell suspects Chip and after collecting some evidence, he comes up with a strange theory. He believes that things, and people, are disappearing up Chip’s butt. Not surprisingly, his superior is not convinced by the hypothesis, but Russell follows his instinct.

The premise of Butt Boy is absurd, weird, and grotesque. It might be too much for a rational mind. However, it portrays the complex reality of addictions and loneliness. Russell cannot leave the past behind and keeps spying on his ex-wife, who lives happily with another man. And with his rectal addiction, Chip is filling a sentimental emptiness in his dull married life. It’s this emotional complexity that makes the characters more interesting.

Overall, Butt Boy works well because of the convincing performances. Especially Cornack’s turn as Chip, an extremely bizarre character. With him, we see a boring, unexcited Chip at first; then his transformation when he experiences climactic pleasure when introducing stuff up his butt, and finally the madness of losing himself to his addiction.

The film is a strange mix of genres. A bit of a thriller, drama, and a cat-and-mouse crime story that has also been categorized as a comedy. However, do not expect to burst out laughing – there is nothing intrinsically funny during the hour-and-forty minutes the film lasts. What makes it humorous is the bizarre and unrealistic twist in an otherwise recognizable and ordinary reality.

Butt Boy is disturbing and shocking, but more or less entertaining, with a few slow moments. The third act takes an even stronger sci-fi turn that’s visually surprising. It’s the most scatological part of the film and even though it’s totally gross, it’s kind of amusing and funny at the same time. Just make sure you’re not having dinner while watching this film, or you might have to run to the toilet.

Chip Gutchel is not a fictional name, it is the name of the director’s Godfather. He used it in the movie because he thought it was a funny name. 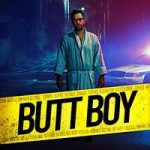