The magical combination of elves, orcs and humans has been done before, and I couldn’t have imagined it being all too easy for David Ayer’s Bright to top that of its predecessor, The Lord of the Rings (2001).

Set in a world where Orcs are considerably more civilised and well-dressed (and when I say ‘well-dressed’, I really just mean ‘dressed’), Bright follows cops Daryl Ward (Will Smith) and Nick Jakoby (Joel Edgerton) as they do their cop thing throughout the streets of Los Angeles.

Cops in L.A. are hated by the masses, and most especially by Orcs. When Jakoby joined the force, he was immediately rebuked by his own kind, seen as traitorous and disloyal. Ward, stuck with Jakoby as his partner, was not happy about it either.

During a routine patrol, Ward and Jakoby come across an Elven girl named Tikka (Lucy Fry) with – of all things – a magic wand. Magic wands in this alternate universe are hard to come by, and people who can hold and use them are just as rare. The film then follows Ward, Jakoby and Tikka as they run from gangsters, Orcs, corrupt police, Feds with questionable motives and elves with crazy ninja skills, all of whom want the wand.

Overall, I was disappointed in the opportunities not taken to truly deliver on character development and I found the writing to be subpar. However, I applaud director David Ayer and writer Max Landis for taking on an old, much-used genre and weaving into the fabric of it a world that we can understand and relate to.

Many of the characters, twists and even key parts of the plot were poorly introduced, explained and maintained. Fry spent most of her screen-time screaming, and though Smith and Edgerton carried the film, their lines fell short from the wit that we see often laced into today’s science-fiction films.

As an avid sci-fi fan, I’d expected big things from Bright, and I was disappointed to hear those ‘big things’ fall to the ground with a resounding thud as the film progressed. By the end of it, I had no emotional connection to what I was watching and was just waiting for it to be over.

Bright, you tried, and there are always points for trying.

Given a budget of $90,000,000, this film is the most expensive Netflix movie investment to date. 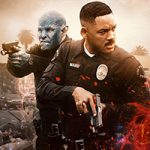