Breath unfolds in the mid-70’s in a remote part of Western Australia with our protagonist Pikelet (Simon Coulter) reflecting on his early teens and transition into adulthood. Adolescent best friends, Bruce Pike, affectionately known as Pikelet and Ivan ‘Loonie’ Loon (Ben Spence) search for a way to escape the monotony of their small hometown. Their search for adventure takes them to a remote beach where their first glimpse of surfing has them instantly enraptured. Equipped with only cheap modified Styrofoam boards, they teach themselves to surf and it quickly becomes an obsession. Their new hobby spurs them to perform multiple odd jobs in order to purchase beaten-up, second-hand fibreglass boards that they laboriously transport on their bikes back and forth to the coast. Their dedication catches the eye of a mysterious character, Sando (Simon Baker), who lives with his American wife, Eva (Elizabeth Debicki) in a remote hippy home near the beach.

Sando, they learn is actually an ex-professional surfer and he quickly becomes their mentor, teaching them about the sea and surfing techniques, while infusing them with his love of the ocean. His reckless nature however pushes the two impressionable boys to take risks, as he introduces them to secret and increasingly dangerous coves in search of more treacherous waves. The competitive Loonie is eager to prove himself as fearless and as wild as the oceans he attempts to tame. However Pikelet, introspective by nature, wrestles both physically and mentally with these new challenges. This has a profound effect on their friendship and when Pikelet finds himself excluded from their adventures, he forms a strange kinship with Sando’s moody wife, Eva. She is initially distant and un-approving of the young arrivals, but Sando’s frequent abandonment of her to follow his boyhood pursuits leaves her yearning for companionship and affection. She finds them in Pikelet’s pubescent infatuation.

The story is based on the 2008 best-selling novel of the same name by celebrated Australian author, Tim Winton, who was involved in the film by adding his lyrical tone as the voiceover narrator of an adult version of Pikelet. Respect for the source material is evident with portions of dialogue lifted directly from the poetic novel.

Australian star of TV’s The Mentalist, Simon Baker, makes his directorial film debut and works with Gerard Lee (Top of the Lake) to adapt the Miles Franklin award-winning novel, Breath. He stated the novel had a ‘profound effect’ on him as he grew up in a similar Australian costal town and found that he shared many things in common with its characters. Now a father of two teenage sons, he has watched them undergo a similar transformation from childhood to adulthood, which gave him a fresh perspective on those coming of age moments.

Cinematographer Rick Rifici captures gorgeous footage of the action both on and under the water, conveying the power and the beauty of the ocean that transfixes the main characters. His work is complimented by lead cinematographer Marden Dean, whose use of soft, natural light adds to the dreamlike and reflective quality of the film.

Baker has assembled an excellent cast, comprising of a mixture of Australian veterans and newcomers. His own role as Sando is perfectly balanced between paternal figure who mentors his young admirers, with a thoughtless surfer dude in search of the perfect wave. Both Spence and Coulter deliver strong debut performances, proving that they were hired for more than their on-screen surfing skills. As the emotional heart of the story, Coulter excellently conveys the complex emotions that the script demands from him but in a soft, understated way that is fitting with the overall tone.

Breath is a hypnotic, reflective tale that beautifully captures the conflict associated with growing-up and discovering our limitations.

As a teen, Simon Baker competed on a state level in surfing and water polo. 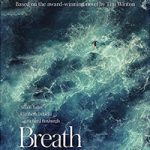