Booksmart is the latest entry into the high school teen-comedy sub-genre and it leaves a mark, but is it good enough to sit alongside the greats?

Amy (Kaitlyn Dever) and Molly (Beanie Feldstein) are two besties in the final year of high school, both of whom are academically gifted. The girls have spent their entire high school lives with their heads in the books gunning for those good grades, while their peers have been partying and enjoying this formative period of their lives. When Amy and Molly discover that their fellow students have been accepted into prestigious colleges even after living loose and carefree over the years, they come to a realisation that they’ve missed out on a lot. It’s then that they decide to cram in as much fun as possible into one night before they graduate.

Booksmart features all of the classic high school teen-comedy movie tropes; there’s parties, drugs and alcohol, love and heartbreak, friendship and friendship quarrels, run-ins with the law and some awkward sexual discoveries, all layered on top of the base theme of self-discovery and the coming-of-age of our two lead protagonists. These are the standard elements that make up the majority of the content in films like these and is why they’re so popular. So where does Booksmart buck the trend, if anywhere?

First-time director (long-time actress) Olvia Wilde injects a sense of realism to the story and themes here that give the film a somewhat original-feeling tone. It’s funny, but not in the ludicrous way American Pie (1999) or Superbad (2007) were. There’s shades of those films and other gross-out whacky comedies in Booksmart too, but Wilde doesn’t go all-in with those aspects. Rather, she opts for the more subtle, witty and what is likely the more relatable approach to teenagers in 2019. This is probably Booksmart’s biggest flaw, in that it doesn’t make for many laugh-out-loud, memorable moments. It’s funny, don’t get me wrong, but it won’t leave you in stitches like some of the other films in this sub-genre that have come before it.

What is memorable, however, is the performances of Kaitlyn Dever and Beanie Feldstein in the lead roles. The girls are naturals and play off each other so well that you’d completely believe these two are best friends in real life. The on-screen chemistry between them and the rest of their co-stars is grounded to the point where everything seems relatable, and there’s one scene in particular where the two girls get into an argument that feels ad-libbed and will leave you in awe. As the audience, we’re invested into these characters right from the start, which is a testament to the performances of all of the young actors in this film under the commendable direction of Wilde. The theme of self-discovery plays a big role in Booksmart, with a lot of the characters coming full circle from where they began at the start of the film, growing as individuals through personal and shared experiences. This is typical of most teen-comedies, though we’re more invested here than with some prior films in the genre. It once again goes back to the passionate performances from Dever and Feldstein which really helps the audience along on the journey with them.

As far as freshman directing efforts go, Olivia Wilde’s Booksmart is a fantastic start. There are kinks in its armour that can be forgiven due to the director still finding her feet in this role, though they don’t detract from its overall entertainment value. Booksmart likely won’t go down in history next to the likes of the aforementioned American Pie and Superbad in the annals of teen-comedy movie history, but it’s definitely one of the better films from this sub-genre to come out in the last decade.

Beanie Feldstein initially read the script for another role that was eventually written out. When Olivia Wilde was brought on to direct, she wanted Beanie for the lead role of Molly. 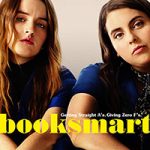