With its blonde star-studded cast, Bombshell does not shy away from shining the spotlight on the true story of sexual harassment at Fox News.

Charlize Theron is the commanding figure of Megyn Kelly, Fox News’ star anchor of 13 years and she absolutely nails the voice. Opening the film as a guide for the audience, she breaks the fourth wall to step out of the many floors of Fox News and explain the inner workings of the conservative cable news company. She consistently and obtusely reminds us that she is not a feminist. When rumors of sexual harassment within Fox begin to swirl, seeing her struggle to fit her own narrative within that of the other women in the company is quite profound to watch, especially as she is simultaneously under attack from presidential candidate Donald Trump.

Nicole Kidman embraces the outdated hairstyle of Gretchen Carlson, the first woman to sue Roger Ailes (John Lithgow) for sexual harassment. The legalities behind this are interesting, and it becomes abundantly clear that Gretchen is not the first woman to accuse Ailes of harassment, she is just the first to do it in a way that prevents Fox News from settling outside of court in exchange for an NDA. She is doing it in a way that, if successful, will force Fox News to purge their newsrooms of the sexual harassment that has been ignored and covered up for decades.

Margot Robbie, as composite character Kayla Pospisil, is hauntingly vulnerable. She balances a sense of surety about herself and the way the world works with a raw naivety. Young and ambitious, Kayla maneuvers herself onto Bill O’Reilly’s production team with the end goal of securing a role on television. But to get on air, she must be approved by Ailes. Her depiction of a harassed woman in a working environment where sexual predation is an open secret is both uncomfortable and heartbreaking. She finds friendship with fellow producer Jess Carr (Kate McKinnon) but Jess is in a precarious position as a closeted lesbian and Democrat (debatable which is worse at Fox News) and pleads to not be told details. Robbie’s character disintegrates from the confident, beautiful young career-woman to one that emanates isolation and fear.

The stories and lives of these women do not intersect as fully as they could. Bombshell maintains an “every woman for herself” theme throughout and there are no conspiring meetups or even tokens of solidarity as the three main characters barely exchange more than a few sentences with each other. However, this is clear that its due to the toxic working environment which pitches women against each other as competition.

There is a certain level of discomfort in watching and rooting for these women. While they should most definitely be lauded and praised for their bravery and wits when it comes to taking down prolific sexual predators, they must also be held accountable for their extensive roles in propping up a right-wing propaganda machine. Not without humor, Bombshell offers an insightful depiction of the work that goes into bringing down a powerful sexual predator and celebrates the immense strength of the women who do so.

The project was originally brought to Charlize Theron’s production company, with the intention of her producing and possibly starring in the film. Once Theron decided to star as Megyn Kelly, Margot Robbie and Nicole Kidman were her top picks for the roles of Kayla Pospisil and Gretchen Carlson, respectively. 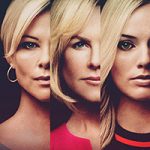