Not Even Vin Diesel Can Save ‘Bloodshot’ Adaptation from Blandness

Taking a break from ruling the box office with the Fast & Furious franchise, chrome-domed action hero Vin Diesel has headed back to the comic-book world with an adaptation of Bloodshot.

For those unfamiliar with the comic, it was one of Valiant Comics‘ biggest sellers in the 90s. It follows the adventures of former soldier Raymond Garrison, who’s brought back from the dead thanks to nanite technology, giving him incredible powers of regeneration, making him virtually unkillable.

This cinematic version follows a similar path to the comic, with Garrison (Diesel) brought back to life after he and his wife are kidnapped and murdered by unknown foes. Intent on revenge, he uses his newfound powers to track down those responsible with the help of Dr. Emil Harting (a charismatic Guy Pearce), the man who gave Garrison a second chance at life. After experiencing strange flashbacks it’s revealed Harting is continually wiping Garrison’s memory and using the former marine as his own personal weapon to take out his enemies. Once Garrison discovers the truth he channels his energy into hunting down Harting and finding out who he really is.

RELATED:  Bob Odenkirk is the Poor Man's John Wick in New Movie 'Nobody'

Bloodshot is a big, dumb, clichéd action flick with very little entertainment value. The story feels rushed and doesn’t really go anywhere, reminiscent of another horrible comic-book film, X-Men Origins: Wolverine (2009). First-time director Dave Wilson was previously a visual effects master, and if Bloodshot is any indication of his skills, he should probably stick to his previous career. This is as bland as it gets when it comes to origin stories and although the high production values make it visually appealing, it’s only one step above your average low-budget action film. Not even the presence of Diesel can save this one. It’s not just Diesel who fails to make an impact, however, with the majority of the supporting cast adding nothing. Eiza González, Sam Heughan and Alex Hernandez, three of Harting’s other test subjects who have been given superhuman abilities thanks to nanite tech could have been played by anyone, while Toby Kebbell is wasted. Only Pearce and Lamorne Morris (hacker Wildred Wigans) give their characters any personality.

Bloodshot is a poor comic book retelling devoid of any heart or humor and another disappointing choice from Diesel, who’ll hopefully redeem himself with the release of Fast & Furious 9.

Michael Sheen was originally set to play Dr. Emil Harting but was forced to drop out due to scheduling conflicts. 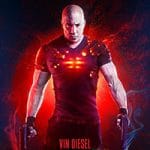