The moment a remake is released, audiences will scrutinise every frame, itching for any moment they can cry ‘the original did it better!’.

Does Timur Bekmambetov’s Ben-Hur, a ‘reimagining’ of the ultra-expensive, incredibly popular 1959 version, do it better? Well, in a word – no.

After Jewish prince Judah Ben-Hur (Jack Huston) is falsely accused of treason by his adoptive brother Messala (Tony Kebbell), he spends five torturous years aboard a Roman slave ship. Judah miraculously escapes and finds his way home, with the help of Morgan Freeman’s Sheik Ilderim. When Judah challenges Messala to a chariot race, the film’s potentially deadly climax is reached.

This new rendering of an oft-adapted religious epic falls dramatically short due to its inconsistency. Where previous versions of Ben-Hur were steeped in a thick layer of sanctity, it seems the current version isn’t sure whether it wants to be bloody and brutal, or as moralistic as the most religious of tales. It’s certainly possible to do both, but it is Ben-Hur’s scenes of violence and bloodshed that appear the most authentic.  Whenever Rodrigo Santoro’s hippie-esque rendition of Jesus appears on screen, his ‘love thy neighbour’ aura seems forced. It’s almost as though he was plonked on screen as an afterthought, with his character holding no heady weight or significance within the film’s main narrative. Ben-Hur’s preachy yet unemotional ending confirms its identity crisis. Judah and Messala’s brotherly conflict is highly convincing, so for the film to end the way it did suggests both an extreme lack of logic, and somewhat lazy writing. On a positive note, Ben-Hur’s crew utilises our digital age’s vast array of high-tech gadgets in order to recreate the chariot racing scene. We probably know what the end result of the race will be, and yet we cannot look away because of its visually stunning, barbaric nature. Thus, it is clear that it is within the violence that Ben-Hur shines.

Jack Huston’s portrayal of such a widely recognised character is well done, but he lacks the star-power of 1959’s Judah, Charlton Heston. The rest of Ben-Hur’s key players, particularly Messala, Judah’s wife Esther (Nazanin Boniadi), and of course Sheik Ilderim, don’t have much to work with, and come off as one-dimensional as a result. It’s a shame that such a diverse cast was under-utilised.

The second remake of Ben Hur (1959) had won a total of 11 Oscars which is a still standing record for most Oscar wins (shared with Titanic and Lord of the Rings: The Return of the King). The first full length feature version of Ben Hur was made in 1925 and a shorter film was made in 1907. 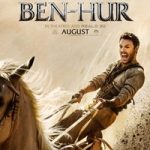