Love Conquers All in ‘If Beale Street Could Talk’ – Review

Two years after winning Best Picture at the Oscars for Moonlight (2016), director Barry Jenkins follows up with his slightly inferior, but nonetheless strong feature If Beale Street Could Talk.

Whilst it deals with racial issues and struggling lower class living, at its core, Beale Street is a powerful love story which shows that love does, in fact, conquer all.

Tish (KiKi Layne) and Alonzo aka ‘Fonny’ (Stephan James) are lifelong friends that have recently discovered that they are also in love with each other. Just when their life together seems to be falling into place (no matter how poor they are), Fonny is arrested and sent to jail for the rape of a Spanish woman who also mysteriously flees the country after his arrest.

As Tish and her family try desperately to prove his innocence, she discovers that she has fallen pregnant with Fonny’s child, sending everyone around her into a frenzy to further prove his innocence, even if it means spending more money than they must to find out which country the victim has fled to. Not all are happy about the news and that includes Fonny’s family, bar his father and it makes for one of the strongest scenes in the film when Tish informs them of the pregnancy.

RELATED:  Matt Damon and Adam Driver Fight to the Death in 'The Last Duel' The performances in the movie are pitch perfect and almost faultless. Relative unknowns Layne and James give career-defining performances and you’re with them every step of the way as the life they build together crumbles around them, yet they keep each other standing strong and hopeful. Regina King, who plays Tish’s mother Sharon is the only Oscar nominee for Best Supporting Actress in the film, is solid enough but you feel as though other cast members deserved it more so, especially KiKi Layne and Stephan James.

There are a few established cameos to be seen from the likes of Dave Franco, Ed Skrein (eerily vile as a racist policeman) and Pedro Pascal, all of which turn in solid performances considering their screen time.

The direction by Barry Jenkins is both confident and inspiring. Following on from the brilliant Moonlight, he shows that his Oscar win was no fluke, showcasing that his heart and soul went into every frame of If Beale Street Could Talk.

So, if you’re looking for a blockbuster antidote at your local cinema, Beale Street delivers in spades. It’s a love story about two people who only ever wanted to be together forever, but must truly fight for it in a world of prejudice and hate.

The movie makes the same mistake as the book. Both claim Beale Street is in New Orleans, while in fact, it is in Memphis. 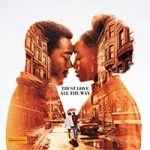