This is not a Batman story I was expecting and after a few days, I think I appreciate it more than when I did when I walked out of the cinema.

Batman (Kevin Conroy) pursues the Joker (Mark Hamill) after he brutally paralyses Barbara Gordon (Tara Strong) and kidnaps the Commissioner (Ray Wise) in an attempt of mirroring his own downfall.

In 1988, Alan Moore released the graphic novel, Batman: The Killing Joke and almost thirty years later, it’s been brought to life in DC’s first R-Rated animated film. This was a very controversial move by DC and Warner Brothers, but was also one that was well received by fans and critics when announced and one I was personally raving about. The result however, not so much.

The story starts out through the eyes of Barbara Gordon and tells of her relationship with Batman as the Batgirl. The exploration of this is honestly annoying. It turns what would be a gruesome tale into a sappy love story that is completely boring and uninteresting. The exchanges between Barbara and her friend are particularly an annoyance as you listen to them talk about relationship problems for a good portion of the start of the movie. Then, the Joker makes an appearance and this is where it gets interesting! The feud between Batman and Joker isn’t the same in this as Batman actually tries to seek out the human side of his nemesis. That is what is so interesting about this story! The humanisation of one of the most iconic and psychopathic villains in the comic book world. This film shows the Jokers decent into madness which is an intriguing piece of storytelling, allowing you to delve into the psyche of the man behind the makeup.

Walking out of the theatre, I was confused and disappointed by the ending and felt there was no climax to the movie, but thinking about it and discussing it with some friends that have read the graphic novel helped me see that the story, though different, is actually quite beautiful. It shows a different side to the masked crusader than anything we’ve ever seen and exposes the humanity of all characters involved.

The performances of all voice actors is outstanding and is not once questionable as Mark Hamill and Kevin Conroy again do what they do best. Though I do now have a different perspective on what the story was actually about, I can’t deny that the first half of this movie is flawed and very boring. This I have been told is actually not part of the novel which explains why it feels so out of place. The Killing Joke part of the film however is tremendous and makes me want to read the source material to understand it fully. Don’t misunderstand this story as I did walking in! This is a character study and The Killing Joke aspects of the film pull it off perfectly.

After the release of Batman: Arkham Knight (2015), Mark Hamill stated that, due to the strain it put on his vocal cords, he would never voice The Joker again unless “The Killing Joke” was adapted into a film. 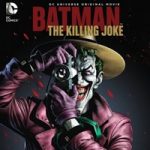