Drew Goddard’s Bad Times at the El Royale is an entertaining nod to the works of Tarantino and the Coen brothers, but never reaches the same heights.

In Bad Times, seven strangers intersect at the El Royale hotel, which literally sits on the border of California and Nevada (a red line drawn down the middle of the hotel separates the two sides of the establishment). The El Royale isn’t just any old hotel, however, harbouring its own seedy secrets along with each stranger’s own. Each of the stranger’s stories come to light bit-by-bit and eventually interweave, resulting in a glorious, bloody climax.

It would be a disservice to filmgoers to reveal any more of the film’s plot, to avoid any element of surprise. Each character has a unique reason for being at the hotel; some righteous, some not, some in the wrong place at the wrong time, some not – all hiding something from one another (the hotel included). This makes for an intriguing setup, as there is an element of mystery that runs all the way through to the end of the film. Writer/director Drew Goddard does an excellent job in keeping the audience guessing, throwing feints at viewers along the way, only to follow with a twist soon after. Bad Times at the El Royale is the epitome of the saying ‘things aren’t what they seem’. While the above points highlight the film’s best aspects, it does, unfortunately, tend to drag on in parts. The film’s characters are engaging and have intricate backstories, however, every segment of their story in the film tends to last a few minutes longer than it should. Goddard’s attempt to mimic the style of directors like Quentin Tarantino, with long, drawn-out dialogue-heavy scenes and a narrative structure similar to films like Pulp Fiction (1994) is a laudable one but still fails to hold a candle to the work its honouring. The dialogue is simply not engaging, or funny enough to warrant extended scenes and the film’s structure, by this point, has been seen many times before. Similarly, it pays homage to quirky films from the Coen brothers, in the form of its eccentric characters getting into trouble they can’t handle, often ending in a violent fashion. That aspect seems to work better for Goddard, even though some of the character revelations felt a bit too convenient.

Bad Times at the El Royale’s most impressive feature is its cast of characters and the performances from the actors that portray them. They’re all amazing, though Cynthia Erivo’s soul singer Darlene Sweet and Lewis Pullman’s shady bell-hop Miles Miller are the standouts. Each character is, however, intriguing and different enough to appeal to a wide range of viewers, meaning everyone in the audience might have a different favourite to root for in the film. It’s a hard task to achieve in an ensemble piece like this one, but the director does so swimmingly.

Bad Times at the El Royale is a multi-layered mystery-thriller film with excellent performances, great production design, a quirky story, clever writing and a great cast of characters. Its pacing is somewhat poor, causing too many opportunities to tune out, while also being a tad imitative of better works. The film’s payoff, well… Pays off, however, making sitting through its lengthy runtime worth it in the end.

Chris Hemsworth had to lose 25-30 lbs of muscle weight immediately after Avengers 4 wrapped to star in this film. 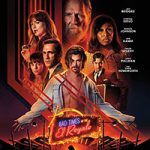