It’s bizarre to me that people living in New York City could resent their wonderous, expansive metropolis, yet it is a common theme among its life-long residents.

The need to explore every corner of the world seems to overshadow the many fruitful experiences available within our very own domicile. It isn’t until we have witnessed culture from around the globe that we begin to wonder: what did we miss at home?

The French drama Back to Burgundy explores this concept with the wanderlusting Jean (Pio Marmaï) returning, well, back to Burgundy, France, to reunite with his ill father. He’s met with polarising reception by his siblings, Juliette (Ana Girardot) and Jérémie (François Civil), who have remained at their father’s winery during Jean’s multi-year global expedition to escape his proverbial anchor to the family’s legacy.

What really shines in this movie is the tense-yet-loving interactions between (what I will refer to from this point as) the Wine Siblings. Director Cédric Klapisch has brilliantly captured the internal and external struggles that siblinghood entails, from the fears of abandonment by your older brother to the anxiety of continuing your family’s name for generations to come. Klapisch frames the conversations to maximise anticipation of what each character is really trying to say when discussing Jean’s abrupt return, or their fathers deteriorating health. Juliette and Jérémie (i.e. The loyal two-thirds of the Wine Sibling empire) have worked hard for all these years to maintain the family’s vineyard and in comes Mr. I-Need-To-Explore-The-World to criticise their methods of making wine, caring for their father and managing their property, despite leaving the town behind him years ago from a supposed lack of compassion to his upbringing. It is a relatable irritation to anyone who has worked on a project with a flaky student or co-worker, grinded through the hard work to hit that goal or score that grade, only to have this mythical dropkick return to take all the credit.

However, the additional relationships in the Wine Siblinghood are a little more hit and miss. Jean, having left girlfriend Alicia (María Valverde) and son Ben in Australia, gives a heartfelt performance expressing the anguish of long-distance phone calls and maintaining a relationship across the globe, while Juliette’s love interest with a fruit picker seems slapped into the plot to provide a failed dynamic in her character’s progression. Hopefully, filmmakers can learn that women do not always need to have a male love interest to offer depth in character.

Despite the minor flaws in filler subplots, the raw emotion in the Wine Siblings’ contentions for continuing a legacy helps create a simple yet effective piece of French cinema, boosted by captivating performances by Marmaï, Girardot and Civil. Back to Burgundy is a great exploration of character for anyone who has experienced power imbalance in their life, with displays of passive acceptance (Jérémie), aggressive passion (Jean) and uncertain self-confidence (Juliette).

The film’s director makes a cameo towards the end in the group ready for the harvest and receiving instructions. 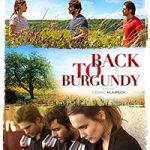