The Babysitter is Netflix’s new gory teen horror, starring the radiant Aussie actress Samara Weaving (you may or may not remember her from a stint in Home and Away before her big break), the young star Judah Lewis, Bella Thorne and Robbie Amell. The film is directed by McG (Joseph McGinty Nichol) from Supernatural fame.

The Babysitter tells the story of young dork Cole (Judah Lewis) and his love for his hot, lovely babysitter Bee (Samara Weaving). Cole is under the impression that Bee is perfect, until he stays up late one night to try and catch Samara in the act with one of her many admirers. However what he finds when he sneaks down from his bedroom is Bee and a group of her friends playing spin the bottle, which seems normal enough, except for the minor detail that they are all part of a satanic cult that sacrifices people (there’s always some deal breaker in a new relationship isn’t there?).

So we’re left with young Cole fending for his life amongst Bee and all her incredibly good looking friends, including Bella Thorne in cheerleader get up of course. The film also uses Netflix’s new found love of using graphics throughout the film, as seen in other Netflix original films such as #REALITYHIGH. Netflix is using its original films, and use of graphics, to capture the attention of the young adult market, but in the case of The Babysitter it is often unnecessary and appears to be trying just a little too hard in the process. The Babysitter is also very gory and full of explicit violence, which creates a much smaller audience for the film than its other teen movie counterparts. However the film does a great job at making a horror film a comedy as well, with some of the best one liners coming from Bella Thorne’s vapid cheerleader character Allison.

The Babysitter is worth seeing just for the cast, which shows brilliant young actor Judah Lewis play that awkward fourteen-year-old age that we all can relate to, and to see young Australian talent Samara Weaving leave Home and Away for good. But don’t be expecting the film to stray from the normal teen horror film conventions.

This will be the second time actors Robbie Amell and Bella Thorne play leading roles together, following their film The DUFF (2015). 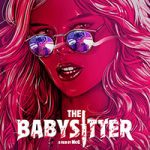