After ten years and eighteen movies with interconnecting storylines, Marvel Studios brings it all together in the event-film to end all other event-films – Avengers: Infinity War, and it doesn’t disappoint.

Thanos (Josh Brolin) finally gets his hands dirty in Infinity War, as he begins the conquest over Marvel’s Avengers and their superhero allies. Seeking six Infinity Stones to adorn his shiny gauntlet, granting him limitless power, Thanos will stop at nothing to see his mission through.

The plot-point that’s been teased for several years now finally comes to fruition here, and it was well worth the wait, as Thanos, and subsequently Brolin’s delivery of the character, is the film’s MVP. Marvel has long lacked in the villain department, giving us only a couple of intriguing bad-guys over the last ten years. Thanos’ desire to destroy half the life in the universe to bring about a more balanced state is mostly farcical, but its Thanos’ unwavering determination to the cause, as well as Brolin’s staunch execution of the character’s lines and mannerisms, and the character’s physical screen presence that make him incomparable, in a good way. Simply put, the writing is excellent. And it’s across the board.

The stakes are higher than ever before for our heroes in this film, and it’s here where the film’s writing team and directors the Russo brothers, have successfully delivered the most emotionally rich narrative to date. The payoff to fans that have kept up to date with all the movies that preceded Infinity War is perfectly executed. Fans that have given their time and investment into these characters over the years will get the most out of this film, though there is more than plenty of action and humour for those coming in without the breadth of knowledge of past storylines that others may have. The film works best as the nineteenth film in a series, and/or the first in an epic two-parter, but also does well as a grand spectacle standalone film. Infinity War takes place across several different planets and regions of the wider universe, splitting our heroes into various mini-groups with the same common cause. The interaction between characters known to each other, and ones meeting for the first time is one of the more interesting aspects of the film, often making for some humorous moments. There are over thirty different character ego’s to serve here, with a handful of new characters as well. Managing an ensemble cast of characters this big in any one film is practically unheard of and a daunting task at best, however the writing and directing team have managed to strike an excellent balance between characters and their clique’s screen times, and serving the screenplay.

The film isn’t entirely without its flaws however. There are of course some plot holes and a long runtime that could have been condensed by closing out some plot-points quicker. Its flaws can mostly be forgiven though, as you won’t have much time to sit there and critique it. The events in the film move at a breakneck pace, and it’s virtually non-stop action from start to finish. This should sit well with most fans, though others may find it overbearing as we’re hardly given a chance to catch our breaths. On the plus side, we’re also not given much of a chance to tune out; the film keeping audiences engaged throughout.

Avengers: Infinity War is the crowning achievement of Marvel Studios’ cinematic efforts and total dominance over Hollywood across the last ten years. It’s the type of film that comes around only about once a decade; an enormous, game changing epic that sets a new standard as to how big blockbuster films can be in the modern age, making it an unrivalled movie-going experience.

Avengers: Infinity War (2018) and the untitled Avengers sequel (2019) are two-part finale films, but not in the same vein as previous two-part films like the “Harry Potter,” “Twilight” and “The Hunger Games” franchises. Instead of one story being told with a cliffhanger at the end the first part, Avengers: Infinity War and the untitled sequel will have two very different stories that complement each other – each of which revolving around Thanos and the Infinity Stones/Gauntlet. 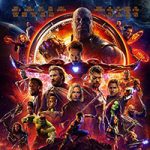