Assassin’s Creed was the film fans were hoping would break the dreaded video-game-movie curse. It didn’t quite do that, but was enjoyable enough.

Callum Lynch (Michael Fassbender), a descendent of an ancient secret society known as Assassin’s, is forced against his will to participate in an exercise that will see him access the memories of his ancestor Aguilar in the 15th century period of the Spanish Inquisition, in an attempt to help the Abstergo Foundation led by Dr. Sophia Rikkin (Marion Cotillard) and her father, Dr. Alan Rikkin (Jeremy Irons), retrieve an artefact that is said to hold the key to curing violence in humans.

It’s a fairly ridiculous plot, and one that people that were not fans of the video-game might have a hard time comprehending. And to be fair, fans of the video-game might find themselves in a similar boat, as this film adaptation doesn’t quite stick true to the game’s story, aside from being set in the same universe outlined in the game. Generally speaking, it’s often the best way for filmmakers to approach the source material from a video game; utilising the core themes and settings of the game, but expanding on the story and making it accessible to non-gamers, creating a unique addition to the franchise’s lore. Assassin’s Creed does this in an almost backwards way, where the story seems like it would fit right at home in one of its video-games, but seemed a bit silly for the film.

One reason that may be the case is that the film moves at a fairly fast pace, making it hard to absorb all the information we’re given. Fans of the video-games will have an easier time keeping up, however to attract a wider audience, director Justin Kurzel and team could have potentially slowed down the pace, and gotten more into the nitty gritty of the backstory behind the Abstergo Foundation, the Templars (who are the Assassin’s nemsis) and the Assassin’s. The film thrusts viewers right into the action, with only a brief detailing of its lead players. The characters could also have used some more development, as we aren’t really given much of an opportunity to empathise with them, due to the film’s pacing issues and back-and-forths between the present day, and 15th century Spain when Callum is in the Animus machine (the machine that gives him access to his ancestor’s thoughts). That period, when the Assassin’s story is front-and-centre, is when the film is at its strongest. The production design and action sequences are of a high calibre, transporting viewers back into what appears to an authentic looking time period. The stunts in the film deserve a special mention, as we get to see the Assassin’s do a fair bit of free-running across Spanish rooftops (a pivotal feature in the game series), along with heart-pounding fight scenes and the famous ‘leap of faith’, as it is known in the Assassin’s Creed game lore. Director Justin Kurzel certainly got these elements of the film right, it’s just a shame that the present-day world and story he’s built was underwhelming in comparison.

Assassin’s Creed reunites Kurzel with stars Michael Fassbender and Marion Cotillard after the three worked together on Macbeth (2015). While this film never pushed the actors as hard as Macbeth did from a pure acting perspective, Fassbender and Cotillard both put in excellent performances. Veteran actor Jeremy Irons is as always a fantastic addition, giving the film a bit of extra gravitas. Alongside the list of things that work in this film is the cinematography, as Kurzel’s long-time director of photography Adam Arkapaw does a fantastic job with the look and feel, which is something of a recurring trend in Justin Kurzel’s films.

Assassin’s Creed suffers from trying to be too smart for its own good at times, with a far-fetched story that’s more suited to its video-game origins. It does however offer enough entertainment value to make it watchable, and the performers and director appear to have done the best they could have with what they had.

The film features the highest free fall performed by a stuntman in almost 35 years. The stuntman Damien Walters performed a free fall from the height of 125 feet (38 meters), which lasted almost 3 seconds with an 61 mph impact speed. 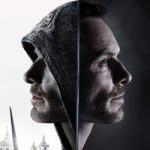