‘Ant-Man and the Wasp’ is Funny, Harmless All-Ages Superhero Fun

Paul Rudd reprises his role as Ant-Man as he partners up with Hope Van Dyne aka The Wasp (Evangeline Lilly), to find Hope’s long-lost mother while fending off bad guys.

Following the events of Captain America: Civil War (2016), Scott Lang/Ant-Man is under house arrest for two years, under the watchful eye of goofball FBI agent Jimmy Woo (Randall Park) and his team. Lang is enjoying his time at home fathering his young daughter when he sees a vision from a lost soul buried deep within the Quantum Realm (the sub-atomic universe Ant-Man visited at the end of the first film).

It’s then when Hope Van Dyne and her father Hank Pym (Michael Douglas), who are now on the run from law enforcement, and estranged from Lang, step into the picture. They’ve secretly been using the Ant-Man technology to develop a tunnel into the Quantum Realm to find Pym’s wife Janet (Michelle Pfeiffer), who has been stuck there for 30 years. When it’s discovered that Lang’s vision was a message from Janet, the three of them team up to complete Pym’s project, hoping to send someone into the Quantum Realm and bring Janet back.

Standing in their way, however, is Ghost (Hannah John-Kamen), a woman with the incredible ability to become invisible at will, and can traverse through physical objects. It’s soon revealed, however, that Ghost’s abilities are more of an affliction than anything, and she sets out to steal Hank Pym’s technology to help contain her gifts. Also on the hunt for Pym’s tech is Sonny Burch (Walton Goggins), a black-market technology dealer, who has some very dangerous clients that also seek the same technology. There are a few different converging plot-points in Ant-Man and The Wasp, and that’s without even mentioning Scott Lang’s friends and business partners, Luis, Dave and Kurt (Michael Peña, Tip ‘T.I.’ Harris and David Dastmalchian), who are mostly there for comic relief. Thankfully, each of the plot-threads intersect nicely, thanks to the energetic and fluid direction from Peyton Reed. Though set in the Marvel Cinematic Universe, the film’s style is more reminiscent of classic 80’s action-comedy films, with sensibilities that parallel films like Honey, I Shrunk the Kids (1989), Innerspace (1987) and Midnight Run (1988). Those films, along with similar ones of the time offer up a successful blueprint for a rip-roaring good time, which is Ant-Man and the Wasp’s biggest asset.

The film is pure blockbuster entertainment. It takes the best bits of the Hollywood action-comedy formula, combines it with Marvel Studios’ well-established characters, throws in a hilarious script, and mixes it with some eye-popping visual effects (especially the character de-aging stuff, which is so-good-it’s-scary at this point). What’s not to love about that? Marvel movie fans should generally be delighted with this, the twentieth entry in the lineup. The general public should also certainly find a lot to enjoy here. Fans that are looking for something a bit more creative from the studio? Maybe not so much.

As is often the case with films that follow the blueprint to the tee, they’re not very memorable in the long run. Sure, the film will give viewers a quick fix of euphoria and escapism, but where does Ant-Man and the Wasp lie in the overall Marvel movie rankings? It’s too hard to even measure at this stage, with so many movies, but let’s just say it probably isn’t in the top ten. Fans that have kept up to date with all the MCU films are obliged to see the film, and shouldn’t be disappointed. For those that are looking for some light-hearted, action-adventure fun, you could do a lot worse than Ant-Man and the Wasp.

Director Peyton Reed stated in a recent interview that he went back and re-watched all of Michelle Pfeiffer’s past movies just prior to working with her. 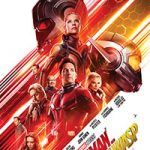