‘Animal Kingdom’ – A Retrospective on an Australian True Crime Drama

There’s a few reasons I’ve got true crime on the brain at the moment.

For one, I’m currently working my way through and absolutely enjoying the gripping Netflix series Mindhunter (2017), which looks at the early days of criminal psychology in the FBI, and profiling of violent crimes and ‘serial killers’ before that term had been coined. Secondly, the American remake TV series Animal Kingdom was renewed for a third season recently.

I remember being fairly non-plussed when I originally saw Animal Kingdom (2010). The main reasons being, it was a fairly slow building story, and I had no idea of the background to the true life events the film was based on. In a rather random exchange, I was recently informed that I currently live at the precise location where the Walsh Street Murders of South Yarra occurred in 1988. This tragic massacre of two young police officers which occurred within observable distance from my lounge room window, I soon discovered, was in fact the inspiration for the Animal Kingdom script. So it seemed fitting a time to revisit the movie.

Giving the film a re-watch and comparing it to the American series, I was pleasantly surprised, finding it a much more intriguing film than I had originally given it credit for, in spite of consistent acclaim and rave reviews which I had somehow ignored.

The early years of this decade were a great time for Australian true crime drama, coming off the backs of the Underbelly franchise (the Nine Network’s critically acclaimed mini series); season one, of which, focused on the Melbourne gangland killings between 1995 and 2004, whilst season two, Underbelly: A Tale of Two Cities (2009) retrospectively filled in the gaps of underworld events in Sydney and Melbourne between 1976 to 1987, leading in some ways up to the pivotal events of Walsh Street. Meanwhile, you also had Snowtown (2011) – an insightful crime story based on the real life, extremely brutal Snowtown murders in South Australia, and Joel Edgerton (who starred in Animal Kingdom) also went on to further exploit the popularity of the genre with Felony (2013), which was slightly less nuanced and researched than its peers, but further proof that something was in the air for Australian crime drama around this time.

Animal Kingdom was written and directed by David Michôd, who would continue to further acclaim as a writer, penning the controversial war movie starring Brad Pitt; War Machine (2017), earlier this year. The characteristic slow directorial style, and mundane realism of Animal Kingdom is carefully copied in the American remake series, and whilst certain casting choices and stylistic flair stand out, it is the story of the movie which makes it so intriguing. Michôd was allegedly fascinated with the Walsh Street police shootings himself, and the family depicted in the film are almost identical to the real life Pettingill family headed by matriarch and former brothel owner Kath Pettingill.

Whilst the characters in the film are given different names, the events and actions of the characters follow very closely the horrific actions of their real life counterparts. Joel Edgerton’s driven performance as character Barry Brown, is no doubt a stand-in for Graeme Jensen, the infamous armed robber, who was shot dead by police in Narre Warren, Victoria, prior to the events of Walsh Street. Whilst Ben Mendelsohn (Andrew Cody) eerily evokes Victor Pierce, a psychopath who along with his brother Trevor Pettingill, Anthony Leigh Farrell and Peter David McEvoy lured two young, rookie police officers to a stolen car, and murdered them in cold blood with a sawn off shotgun, as a violent reprisal for the murder of their friend Graeme Jensen. The film loosely follows the real life arrest, trial and eventual bungled acquittal of the two brothers.

RELATED:  'The Batman' Trailer Features the Most Ruthless Batman to Date

James Frecheville gives an utterly chilling performance as the disturbed younger brother who eventually comes forward to become a prosecution witness, mirroring the real life figure of Jason Ryan. The only real deviation from the true events is the ending in which Frecheville’s character Joshua Cody finally confronts his brother Andrew and murders him. In real life, after being acquitted, Victor Pierce lived for some time before allegedly being murdered in May 2002 by underworld hitman Andrew Veniamin; shot dead in a car park opposite a Coles supermarket in Port Melbourne.

Victor Pierce’s funeral was attended by Jason Moran, former running mate of Alphonse Gangitano, both of whom featured heavily in the first Underbelly series, and it is such a pivotal event in Australian history, which no doubt contributed to the hostility felt by police. Feelings which would later trigger the Purana task force against organised crime in Melbourne.

The Walsh Street massacre has featured in other dramas and re-enactments, including the fondly looked on New Zealand crime series Killing Time starring Aussie actor David Wenham as disgraced Lawyer Andrew Fraser. You can even catch this series’ version of the Walsh Street events on YouTube (Almost a five minute version of Animal Kingdom):

Animal Kingdom will no doubt occupy a place in Australian film history for some time to come, just as Wolf Creek (2005) has been cemented as an Aussie horror classic by being turned into a series, Animal Kingdom is now an Australian icon. Respectively, given the gravity of the events and their effects on Australian culture, this seems appropriate, but it seems important to remember the actual events which inspired the now iconic fictionalised Cody family, almost turned into a soap opera family in the American series, and the events which changed the way Australia viewed itself.

There seems to be another bubbling resurgence of true crime drama towards the end of the decade which started strongly in crime, and given Australia’s commendable history, we can only hope that we see more of this trend for home grown excellence in this genre. This year also saw the long awaited sequel Blue Murder: Killer Cop (2017), an Australian TV miniseries following on the events of Blue Murder (1995). Just as Underbelly: The Golden Mile (2010) looked at police corruption in Sydney which led to the 1995 Wood Royal Commission – Blue Murder takes an unapologetic look at police corruption in Kings Cross, Sydney. Particularly the disgraced former detective and convicted murderer Roger Rogerson, played sensationally by Richard Roxborough. Blue Murder: Killer Cop was a fantastic two part miniseries, well worth checking out, as it fills in events up to the notorious murder of Jamie Gao – a crime which finally led to the despicable Rogerson’s downfall, arrest and conviction.

In 2018 we also have the Underbelly Files: Chopper series to look forward to; the iconic felon who ties heavily into other events in Australia’s criminal history, including the previous Underbelly series’. Of course, for some, Eric Bana’s iconic performance as Chopper (2000) will always be the quintessential version of this character. Nonetheless, it seems that we may be in store for more great Australian true crime drama in the near future, and I personally, thoroughly welcome it.

Quentin Tarantino named Animal Kingdom as his third favourite film of 2010 after Toy Story 3 and The Social Network. 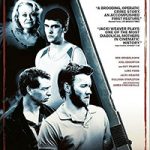