‘Angel Has Fallen’ Review – Get the Popcorn Ready

After rescuing the President of the United States of America from a hostage situation in action blockbuster Olympus Has Fallen (2013), then saving him again from terrorists in London Has Fallen (2016), Secret Service agent Mike Banning is back a third time in Angel Has Fallen to uncover a conspiracy that could bring about his downfall.

Scottish actor Gerard Butler returns in the action-packed Angel Has Fallen as Banning, sworn to protect President Allan Trumbull (Morgan Freeman) with his life. Struggling with an addiction to painkillers and a body that’s almost reached its limits, Banning is nearing the end of his days as a field agent when a visually stunning drone attack is carried out on Trumbull.

Although both men survive, Banning’s entire team is killed and the once-revered agent is arrested and charged with being the man behind the failed assassination attempt on Trumbull’s life.

Escaping custody and with the entire FBI on his tail, Banning is forced to turn to the one person he doesn’t want to see in order to clear his name and save the country from World War III. If you’ve seen any of the previous films in this franchise then you’ll know what to expect with Angel Has Fallen; an entertaining popcorn action flick with some big set pieces and a plot with more holes than a slice of Swiss cheese. Leave your brain at the door and enjoy Butler taking out countless enemies with well-choreographed fights and incredible marksmanship.

Although he’s established himself as a Hollywood lead, I’ve never been a Butler fan, but I have to admit there’s something about the gruff, everyman personality he conveys in this film that works. This type of action film is great for covering his limited range as an actor. Throughout the series, he’s managed to make Banning a likeable character that loves his family but can still kick ass when the time calls for it.

Butler could be the worst actor ever and it wouldn’t matter when you look at the actors he’s surrounded by. Freeman is engaging as ever as the President, even if he spends half the film in a coma, while Danny Huston as Banning’s friend-turned-foe, Wade Jennings, makes what could be a bland villain enticing. Piper Perabo as Banning’s wife doesn’t have much to do but is serviceable, while the return of Lance Reddick as Secret Service Director David Gentry and the surprise appearance of Jada Pinkett Smith bolsters the acting credibility. The ensemble cast is rounded out by Nick Nolte as Banning’s long lost father, with the acclaimed actor growling his way through scenes like the grizzled vet he is.

If you go in expecting a high brow action flick in the vein of the Bourne films you’ll be disappointed, but if you’re after a few explosions and a high death count where the plot isn’t a huge concern, Angel Has Fallen ticks all the boxes.

This is the second film where Morgan Freeman has played the President. The first was in Deep Impact. 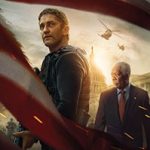