Crime pays. It pays big, until it doesn’t. Barry Seal (Tom Cruise) experiences this first-hand in American Made – based on an extraordinary true story.

Seal, a commercial airline pilot/small-time Cuban cigar smuggler, gets recruited by CIA agent Schafer (Domhnall Gleeson), to fly planes in the aid to counter the emerging communist threat in 1980’s Central America. His new gig, and Seal’s opportunistic nature see him get involved with Colombia’s notorious Medellin cartel, smuggling drugs for them, which then in turn sees him form an alliance with the American Government, in order to help them take down the cartel.

American Made’s story is certainly a case of the truth being stranger than fiction. Here is a guy that’s living the capitalist-American dream, in a time where you could smuggle drugs around the world in a light plane and get away with it, leading to immeasurable riches. However, this lifestyle can not last long and generally doesn’t end in favour of the protagonist, as we’ve seen in many other stories of a similar nature told on film; most notably Ted Demme’s 2001 drug-crime drama Blow, of which this film shares many similarities with.

The similarities mostly lie in the fast-paced way in which the story is told, jumping from location to location, time period to time period and so on, in a montage-like fashion (the film essentially feels like a 2 hour montage). This type of storytelling is effective in keeping audiences hooked, as it doesn’t give them much of a chance to tune out, however it can also be a double-edged sword, as other compromises must be made in keeping such a pace. The biggest compromise here, unfortunately, is in the character development department. While we’re with Cruise’s Seal for the entirety of the film, we never really get to know what makes the character tick. From the film’s onset, we’re thrust right into the action, and it’s non-stop all the way to the end, which means the film doesn’t allow much time to get an insight into our main character’s motivations, other than the obvious – money. However, money as the motivating factor to turn to a life of crime is an obvious one – what we really miss out on is seeing what drives the character; did he grow up poor? Was he unhappy in life and needed a change? Was he simply just in the right place and right time, and didn’t care about the consequences? While the audience can likely come to these conclusions themselves, the deeper background to the character is never really explored.

Thankfully, Tom Cruise’s performance helps us overlook some of these issues. American Made, for the most part, rests on the shoulders of its lead star, and he doesn’t let it down. Cruise is in top form here, even though he’s playing a somewhat typecast character, but if it ain’t broke then there must not be a reason to fix it. Domhnall Gleeson is also great, though his role is a lot more limiting, and once again the film does not go too far into his backstory.

American Made is a mile-a-minute romp through the various stages of a criminal’s life adventures – adventures that seem too crazy to be true – even though they are.

This marks as Tom Cruise’s third biographical film, along with Born on the Fourth of July(1989) and Valkyrie (2008). 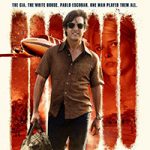