In American Honey, a teenage girl with nothing to lose joins a group of misfits who travel the country selling magazine subscriptions.

Andrea Arnold is a director whose work has often been considered quintessentially British, and so it is fascinating to consider that which may be her best work yet is a piece of pure Americana.

American Honey feels very much like 2000’s Almost Famous for the youth of today. This thought has striking implications for the way society and culture have changed over the years, considering the films are also opposites in many ways. If Almost Famous was about middle-class kids running away from mediocrity, American Honey is about poor kids running toward stability. Not the stability of a traditional home, or a nine-to-five work life, but the stability that comes from being part of a family. A tribe built from the ground up; vastly different people from all over the country whose greatest commonalty is that they are so uncommon. They are united in their individuality; unable to fit in anywhere else – they fit in with each other.

Where other films about underprivileged kids would wallow in the misery of everyday life, American Honey – like its characters – finds joy and meaning in unexpected places. Hanging out of the sunroof, dancing to Rihanna in a supermarket, enjoying the company of friends; there’s enchantment in everything if you have the right perspective. And Andrea Arnold certainly does. The standout performances are without a doubt Sasha Lane and Shia LaBeouf. LaBeouf does his best work to date, and Lane, who was plucked from obscurity on a beach at Spring Break by the director, gives a masterful performance in her first role.

American Honey is a warm-toned mood board of the American lives we rarely see portrayed in cinema; small towns, motel rooms, and Mountain Dew. Arnold takes a group of outsiders, and without looking down on them, presents them to us exactly as they are, flaws and all. There is an unmistakable purity and optimism that runs through the veins of American Honey. Its charm is infectious.

This of course comes from the story and the characters, but it is also communicated visually. The filmmaking is so strong that the lack of an involved plot doesn’t particularly matter. The rich colours and high contrast imagery are breathtaking, and despite the unconventional 1.37:1 aspect ratio, the frame feels so vast and full of possibility. The visuals are mesmerizing, and when paired with the soundtrack of modern rap and pop music, the feeling is overwhelming. Exactly what that feeling is, however, is hard to describe; a longing for mischief; nostalgia for a life you haven’t actually lived; or a yearning for the simple beauty experienced by others.

Whatever the feeling, it is pure, and hopeful, and solidifies American Honey as a must see.

Director Andrea Arnold wanted to work with unknown actors and would often approach teenagers on the street whom she thought would be good for the movie, holding impromptu auditions in parking lots. 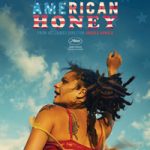