The latest re-telling of the classic Alice in Wonderland is an entertaining, visually stunning film.

Tim Burton (Sweeney Todd, Charlie and the Chocolate Factory), in his classic style brings ‘Alice’ to the screen with a myriad of colours and colourful characters made famous in Lewis Carroll’s novels “Alice’s Adventures In Wonderland” and “Through The Looking Glass, And What Alice Found There”. Although in the latest rendition of those classic stories, Alice returns to Wonderland (or Underland to be technical) in her late teens to find the place in turmoil under the control of the Red Queen (Helena Bonham Carter). Alice is told she is the only one that can slay the mythical Jabberwocky (voiced by Christopher Lee) as she is thrust on to a new adventure that leads her to play her inevitable role.

Alice is played by Australian-born newcomer Mia Wasikowska (Defiance, Amelia). Wasikowska plays the non-compliant and free-spirited teenager well, though it takes three quarters of the film’s length for her character to warm on you, a task in which her big name co-star in Johnny Depp (Public Enemies, Blow) fails to achieve in his portrayal of the Mad Hatter. Depp’s Mad Hatter is a fusion between his portrayal of Willy Wonka and basically all of the other quirky not-all-there characters Burton has had him play in the past, a trend that is becoming a little tiresome for an actor of Depp’s capacity. Helena Bonham Carter (Sweeney Todd, Big Fish) is excellent as the Red Queen although the story fails to delve too much on her relationship with her sister the White Queen, played by Anne Hathaway. With several of the characters failing to garner any kind of emotional attachment with the audience, we are at least given some comedy relief from Tweedledee and Tweedledum, the film’s funniest characters played by Matt Lucas.

Although there is some substance lacking in the film’s plot and characters, the film’s visual style and graphic achievements are superb. The film is shot in 3D and uses a mix of visual effects techniques including actors shot against green screen, full CGI characters and motion capture performances. The 3D adds that extra depth of field to the brightly lit landscapes and characters and works well in this film.

Stylistically, Tim Burton was an excellent choice to direct this version of Alice in Wonderland. He takes the already bizarre world of Wonderland and its characters and puts his defining twisted touch to it as he does with all his films and it works well, it just seems that each new Burton film that comes out now borrows from the last, which is one of the film’s biggest gripes. It is good to see new Australian actors making their mark overseas as Wasikowska puts in a solid performance and by the end of the film you can see that she has a lot of potential to make a great career for herself. Alice in Wonderland is an entertaining, visually spectacular film and should only be judged in that consideration.

Johnny Depp, who says that he likes “an obstacle” whilst filming, admitted that he found the process of filming on a green screen “exhausting”, and that he felt “befuddled by the end of the day”. 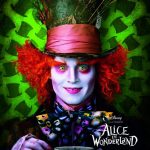