If the sight of a Smurf-like Will Smith in the teaser trailers for Aladdin had you shuddering in your boots, you weren’t alone.

The Twitter community was in an uproar about the very, very blue Genie when the initial trailers were released and lucky for us, Disney listened. You can breathe easy – you won’t be subjected to two hours of a blue-hued Smith in this live-action remake of Disney’s beloved animated film from 1992. However, you might be aware of a giant Robin Williams’ shaped shadow cast across the entire remake. Smith, despite all his Fresh Prince attitude, doesn’t quite fill the magic lamp left behind by the late, great comedian.

As with all of Disney’s live-action remakes, the casting of cherished characters is always up for hot debate and Aladdin’s casting had its fair share of controversy. In 2017, it was reported that despite a plethora of extremely talented POC actors, Disney was having difficulty finding culturally appropriate actors to depict Jasmine and Aladdin. This once again highlighted the glaring problem Hollywood has with hiring people of colour in lead roles. When Disney finally made a closely scrutinised decision, they announced two relatively unknown actors in the iconic roles – Naomi Scott as Princess Jasmine and Mena Massoud as Aladdin. Although Aladdin is the title character, this film is very much Jasmine’s kingdom. Scott’s powerful portrayal of the strong-willed princess will undoubtedly have little girls everywhere inspired. Massoud does Aladdin justice, but his character just doesn’t have the same quick-witted cunningness as his animated counterpart (Scott Weinger), nor singing voice.

The standout character by far was the Magic Carpet – such a sweet, naïve character who enjoys building sandcastles but is never far away when its levitating properties are needed. And of course, Abu the monkey is there every step of the way stealing just as many hearts as trinkets from the market.

Marwan Kenzari’s portrayal of villain Jafar can be described as lacklustre, possibly even meme-worthy. Kenzari doesn’t generate enough malicious energy for the audience to truly detest the character, and when the original animated character was just so sinister he gave children everywhere nightmares – this is deeply disappointing. This reimagining of Aladdin is undoubtedly lavish. The set is gilded with gold and glitzy tapestries and the costumes mesmerising. The dance sequence to Prince Ali’s song is so elaborate, colourful and entertaining it could have doubled in length and not lost its audience’s interest.

Guy Ritchie as director is an interesting choice; his expertise lies in gangster films. He is recorded as saying his five children were behind his decision to take on the family film. However, just because a director is a father doesn’t mean he is automatically a skilled family filmmaker. There were probably too many clunky cuts and odd framing choices which did not serve the film well.

The thought of a whole generation of children growing up with this version of Aladdin is a little bit disheartening, and 90’s kids are likely to baulk at this attempt to redefine their childhoods. Re-watch the original to be reminded of Disney’s heyday.

Sir Patrick Stewart campaigned for the role of Jafar. He had previously turned down the role in Aladdin (1992) and has regretted it ever since. 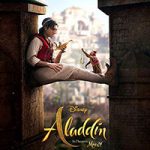