It’s always touch and go with Adam Sandler as to whether his films are going to make me laugh or make me cringe. I was especially sceptical about The Week Of and wasn’t expecting anything more than the crass lines that Sandler usually delivers.

However, I ended up pleasantly surprised by his ability to make me both laugh AND cringe, AND still enjoy the movie all the way through to the end!

The Week Of follows the Lustig family in the week leading up to the eldest daughter, Sarah’s (Allison Strong) wedding. Adam Sandler plays Kenny Lustig, father of the bride and organiser of the event. He refuses to accept help from anyone else, even as all of his well-laid plans fall to pieces around him. Kirby Cordice (Chris Rock), wealthy heart surgeon and estranged father of the groom, continually offers to help fix things but Kenny is too proud to accept. The film exudes a similar air to that of My Big Fat Greek Wedding (2002), what with the Lustig family being extensive, Jewish, and quick to get all up in each other’s business. Kenny’s home is overrun with family members and though they are all very much crammed in, no one ever complains or jeers or wants for anything other than what they are given. Writers Robert Smigel and Adam Sandler cleverly capture the essence of what it is to be a family; irritatingly close and endlessly understanding.

RELATED:  'Language Lessons' Review - A Friendship is Born Across Screens

Countless times during The Week Of, I found myself laughing out loud at the hilarity of Kenny and his ridiculous attempts to save money on Sarah’s wedding. Smigel and Sandler have put together a great piece of comedy here, one that is entirely too relatable and refreshingly honest. Not only does the setting and simple costuming used throughout The Week Of reflect the Lustig’s lack of wealth, but it also reinforces the idea that money does not maketh the man. Kenny has a big heart and his actions in the lead up to his daughter’s wedding highlight the importance of giving more than you have for the people you love, and sometimes even for the people you don’t. 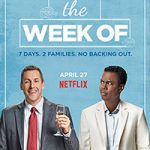